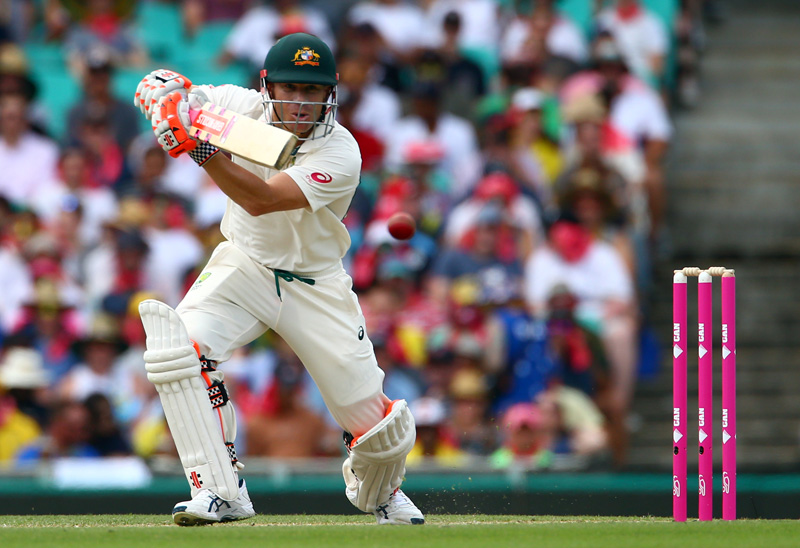 Australia's David Warner hits a shot. Photo: Reuters
NEW DELHI: David Warner has never suffered from a lack of confidence and his experience of battling through previous run droughts has the Australian opener convinced he will soon be getting big scores on the board again. The 30-year-old lefthander has been an almost singular disappointment for the tourists so far in their enthralling test series in India, having scored just 131 runs in six innings. Warner experienced a similar downturn in fortunes during the last Australian summer and he started the second test against Pakistan on Boxing Day without a test century to his name for almost a year. He responded with a match-turning 144 in Melbourne and followed that up with an astonishing century in a single session in the third test in Sydney. "You've got to keep telling yourself you've done the hard yards, you just don't lose it overnight," he told reporters in Ranchi. "There were tough periods where I kept on thinking to myself, 'Am I actually doing the work at training?' You always question yourself, are you doing the right things at training and are you preparing as well as you can? "(But) I've just got to go out and keep backing myself and, when I'm out there, adapt to the conditions and then keep backing myself to try and keep putting the runs on the board." Warner's track record means his position at the top of the order is in no way under threat for the fourth and decisive test at Dharamsala, but the old questions about his ability to score runs away from home have been raised yet again. The Sydneysider admitted he struggled a bit when the ball was not coming onto his bat as it would on Australian tracks but stressed he was not alone in taking time to adapt to conditions. "Everyone in world cricket, greats and legends of the game, have had stints overseas or at home where they've had some form slumps, and that's just the game of cricket," Warner added. "I feel fantastic, I couldn't be hitting the ball any better but it's just that the runs aren't coming for me at the moment. That will come, it will turn around. "I just have to keep being disciplined and making sure that my preparation is still the same. Don't change anything, and just go about my business as I do." The series, which is tied at 1-1, resumes in Dharamsala on Saturday.
#India #Australia #Virat Kohli #Steve Smith #David Warner #TEST MATCH CRICKET
You May Also like: