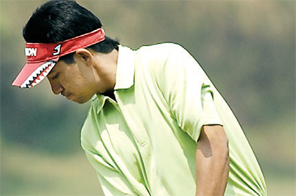 Rupak Acharya plays a shot during the Surya Nepal NPGA Tour Championship second round at the Gokarna Golf Club in Kathmandu on Wednesday. Source: THT

KATHMANDU: Rupak Acharya carded one-under 71 to take two-stroke lead over Ram Thapa after the second round of the Surya Nepal NPGA Tour Championship here at the Gokarna Golf Club today.
Rupak completed the second consecutive under-par card for a total of four-under 140, two strokes ahead of Ram Thapa, who shot two-under 70 today. Krishna Hari Mizar and Deepak Acharya, elder brother of Rupak, shared the third position at 143. Overnight leader Mani
Rai shot six-over 78 to
slip to fifth with a total of 146. Purna Sharma (147), Deepak Neupane and Ramesh Nagarkoti (148), Rajan Thapa (149) and Pashupati Sharma (150) rounded up the top 10.
Others who made the cut applied at 13-over were Gopal Nagarkoti (151), Sanjay Lama (151), Surya Sharma (152), Tham Bahadur Rai (152), Deepak Thapa Magar (154), Rabi Khadka (155), Krishna Man Rajbahak (155), Sachin Bhattarai (155), Ram Krishna Shrestha (156) and Raj Pradhan. Yelamber Singh Adhikari, Dhana Thapa, CB Bhandari, Jaya Ram Shrestha and Radhe Shyam Thapa failed to make the cut.
In Amateur section, Ramesh Adhikari carded six-over 78 for a total of seven-over 151 but still maintained a three-stroke lead over Samundra Giri, who shot 10-over 82. One stroke adrift was Tashi Tsering after a round of 78, while Dipendra Rayamajhi survived the cut at 161.
Rupak, who turned pro from this event, played a flawless round of golf on the front nine that included two birdies. The newly turned pro took the turn at two-under but he could not maintain the rhythm in the back nine shooting three bogeys — 11th, 14th and 17th — against back-to-back birdies on the 15th and 16th holes.
Ram Thapa, who was tied fifth after the first round, produced the best card of the day with two-under 70 to climb up to second position. He signalled a warning when he went three-under only
after the first five holes
but was forced to drop a shot on the sixth hole, meaning the RNGC pro took the turn at two-under 34. On the back nine, he birdied the 10th and 12th to go four-under but a double bogey on the par-3 13th prevented him from sharing the lead.
Krishna Hari Mizar, who was tied with Rupak at 69 and Deepak Acharya, who was fourth at 71 after the first day, shot 74 and 72 respectively to share the third position. Overnight leader Mani Rai of Dharan slipped to fifth after a horrible round of 78 for a total of two-over 146.
A total of 20 pros and four amateurs made the cut for the last two rounds of the final event under
the Surya Nepal Tour 2009-10. Out of the total prize money of Rs 350,000, the top three winners will receive Rs 72,000, Rs 41,000 and Rs 32,000.