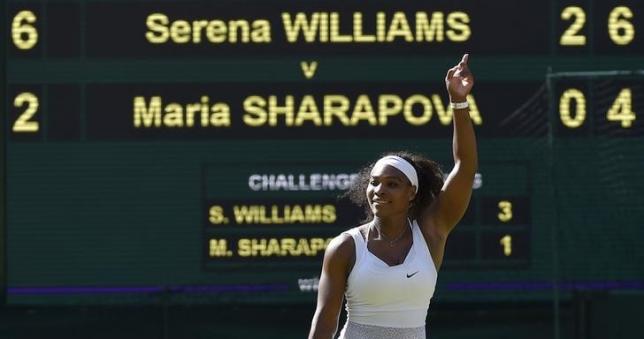 Serena Williams of the U.S.A. celebrates after winning her match against Maria Sharapova of Russia at the Wimbledon Tennis Championships in London, July 9, 2015. REUTERS/Toby Melville

"During the morning's training session Serena injured her elbow. She was examined after training by the WTA's medical team who advised her against continuing the tournament," said a statement on the Swedish Open website.

Williams' exit will benefit Czech player Klara Koukalova who she was to face in the second round on Thursday afternoon.

Williams has just won her sixth Wimbledon title -- the 21st grand slam of her career -- and is on course to win all four slams this calendar year after earlier triumphs at the Australian and French Open.