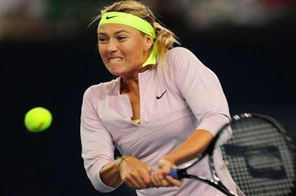 Russia's Maria Sharapova hits a backhand return against China's Peng Shuai in the third round of the China Open in Beijing. Sharapova became the latest upset victim at the China Open on Wednesday, while compatriots Nikolay Davydenko and Svetlana Kuznetsova sailed into the quarterfinals in Beijing. Source: AFP/Frederic J. Brown

BEIJING: Russia's Maria Sharapova became the latest upset victim at the China Open on Wednesday, while four of her compatriots including Nikolay Davydenko advanced to the quarterfinals in Beijing.
Sharapova, a three-time Grand Slam winner, made 21 unforced errors and surrendered her serve four times in the 6-2, 6-4 loss to China's Peng Shuai on centre court at the Olympic tennis venue.
The 22-year-old Russian, ranked 15th in the world, looked sluggish, with her ferocious ground strokes too often landing in the net or beyond the baseline, while the 53rd-ranked Peng remained solid, making just three unforced errors.
Sharapova saved two match points in the final game, but handed Peng the victory on her third attempt by netting a forehand.
"My energy level was definitely not where it should have been.... I don't think I executed as well as I should have," Sharapova said, heaping praise on her opponent.
"She played really solid and really aggressive and she did all the right things to win the match today."
Sharapova added her name to the list of stars who have made an early exit from the 6.6-million-dollar mixed ATP/WTA event.
Dinara Safina and Venus Williams -- along with defending champions Jelena Jankovic and Andy Roddick -- have also been ousted from the tournament.
Fourth seed Davydenko, who won his third ATP title of the year in Malaysia last weekend, trounced Germany's Philipp Kohlschreiber, allowing the world number 22 only one game in a 6-1, 6-0 romp.
The 28-year-old Russian, the world number eight, is fighting to secure a place in the season-ending ATP World Tour Finals in London in November, which will feature the top eight men's singles players.
Roddick, Fernando Verdasco, Fernando Gonzalez and Robin Soderling are also vying for the final three spots in the London draw. Roger Federer, Rafael Nadal, Andy Murray, Juan Martin del Potro and Novak Djokovic have qualified.
Besides Roddick, the other London hopefuls are all still in contention in Beijing.
In the quarterfinals, Davydenko will face Croatian eighth seed Marin Cilic, who rallied to defeat France's Julien Benneteau in three sets, 6-2, 2-6, 6-0.
On the women's side of the draw, three other Russians had better luck than Sharapova.
Fourth seed Elena Dementieva took less than an hour to dismiss Asia's number one Li Na of China, 6-2, 6-0.
Dementieva, who won the Olympic gold medal on the same centre court last year, broke the 16th-seeded Li's serve five times en route to the easy win.
Svetlana Kuznetsova, the sixth seed, lost her focus mid-match but stormed back in the third set to beat Ukraine's Alona Bondarenko, 6-3, 4-6, 6-0.
The two-time Grand Slam winner showed some grit in the decider, breaking Bondarenko at the start and cruising to victory without dropping another game.
Talented teen Anastasia Pavlyuchenkova, who upset world number three Williams on Monday, continued her winning ways, defeating Canada's Aleksandra Wozniak in straight sets, 6-4, 6-4.
Kuznetsova and the 18-year-old Pavlyuchenkova will face off in an all-Russian quarterfinal.
Djokovic was due on centre court for the last match of the night.

#Sharapova falters #Davydenko wins at China Open
You May Also like: