Sharapova into last eight of Wimbledon after downing battling Diyas 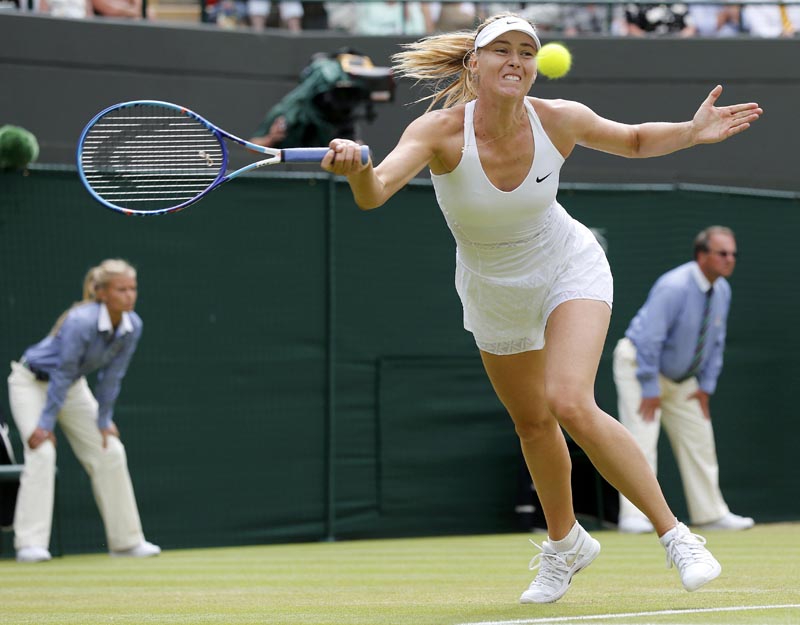 Maria Sharapova of Russia hits a shot during her match against Zarina Diyas of Kazakhstan at the Wimbledon Tennis Championships in London, July 6, 2015. Photo: Reuters
LONDON: Maria Sharapova came through a spirited test from Zarina Diyas to reach the quarter-finals at Wimbledon on Monday, eventually subduing the tenacious scrambler from Kazakhstan 6-4 6-4 after a brief scare in the second set. The Russian, who had not been past the fourth round since 2011 at the tournament she won for the only time as a teenager 11 years ago, will now face American Coco Vandeweghe in the last eight. Her victory over Diyas was far from comprehensive, but further evidence nonetheless that things are looking good for the fourth seed as she maintained her unblemished record of not dropping a set up so far. She found her range early under hazy skies on Court One, peppering the baseline with her usual array of missiles and breaking for a 3-1 lead with a rasping crosscourt winner. Diyas, who surged 129 places up the rankings in 2014 to 34th, showed she was no soft touch by breaking back in the ninth game, having saved two set points, but Sharapova's extra power told and she clinched the first set on her opponent's serve. There was a clear shift in momentum, however, at the start of the second as Sharapova's concentration slipped and the Kazakh broke and held for a 3-1 lead. Ultimately, however, Diyas lacked the weapons to maintain that advantage and the five-times grand slam champion broke back for 3-3 and then closed out the match on the Diyas serve when the Kazakh sent a backhand long.
#Maria Sharapova #Wimbledon #Women's Singles #Zarina Diyas
You May Also like: