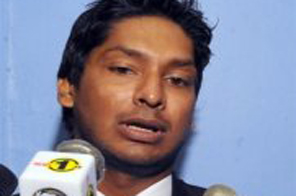 Sri Lanka failed to qualify for the semi-finals of the tournament's last edition in India in 2006 Source: AFP

COLOMBO: Sri Lanka will be looking forward to impressive contributions from top-order batsmen to make a big impact on the Champions Trophy.
Sri Lanka failed to qualify for the semi-finals of the tournament's last edition in India in 2006 and look keen to turn around things this time with an improved performance.
Consistency is Sri Lanka's main problem. They were always considered unbeatable at home but have produced a mixed bag of results in recent times, having lost to India twice, beaten Pakistan once before losing to India again in Monday's Tri-nations series in Colombo.
"Over the last year, we have been patchy and inconsistent in one-day internationals," senior batsman Mahela Jayawardene said recently.
"The top order has to get runs. We get to bat the most overs, and it's our responsibility to get the big scores and bat through the innings."
Sri Lanka cannot afford to be inconsistent as they are in a tough Group B with South Africa, England and New Zealand, who are capable of beating the best on their day. The top two sides will advance to the semi-finals.
Openers Sanath Jayasuriya and Tillakaratne Dilshan are expected to play big roles as they can dominate any attack with a wide range of attractive strokes.
Jayasuriya may be the oldest batsman at 40, but can overshadow youngsters with his unorthodox stroke-making. He returned to form with a blazing 79-ball 98 in a recent match against India in Colombo.
Sri Lanka's search for an aggressive pair of openers appeared to have ended with the recent exploits of Dilshan, a middle-order batsman performing the role of an opener remarkably well.
Dilshan has already been nominated for three International Cricket Council awards -- Cricketer of the Year, Test Player of the Year and Twenty20 International Performance of the Year.
Sri Lanka also have solid batsmen in skipper Kumar Sangakkara, Jayawardene and Thilan Samaraweera to capitalise on a brisk start, but expect more from others to set or chase a stiff target.
An encouraging piece of news for Sri Lanka is that their pacemen, led by Lasith Malinga, have been backing the spinners in recent matches.
"The positive for us has been our bowling, which has been consistent and has allowed us to use well the variations we have at our disposal," said Jayawardene.
Veteran off-spinner Muttiah Muralitharan, the world's leading wicket-taker in Tests and one-dayers, is as shrewd as ever in drying up runs or taking crucial wickets.
Sri Lanka have an unorthodox spinner in Ajantha Mendis, who mesmerised batsman with his subtle variations last year. He has been struggling of late and his side expect him to regain rhythm soon.
They also have an effective pace attack to put the opposition on the back foot, with Malinga, Nuwan Kulasekara and Thilan Thushara all among wickets in recent matches.

#Sri Lanka expect top order to fire
You May Also like: