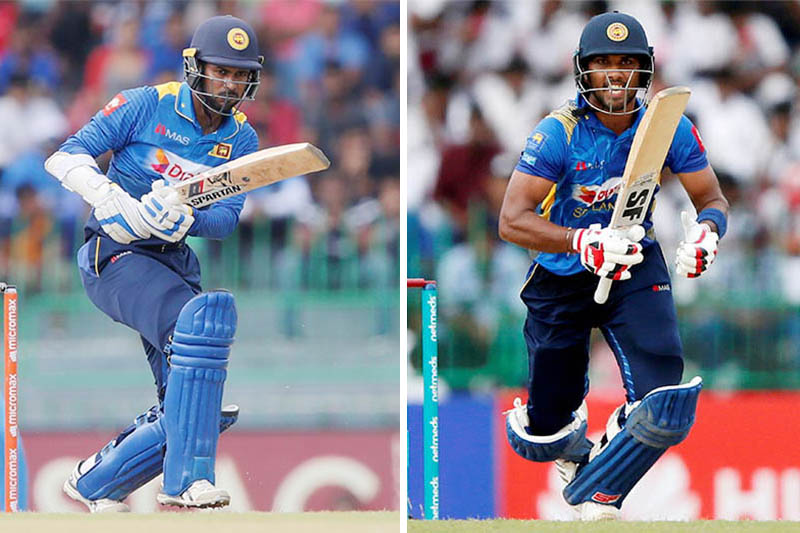 Sri Lankan batsmen Upul Tharanga (left) and Dinesh Chandimal. Photo: Reuters
COLOMBO: Former Sri Lanka captains Dinesh Chandimal and Upul Tharanga were left out of the 15-man squad announced on Thursday for the World Cup in England and Wales, while spin-bowling all-rounders Milinda Siriwardana and Jeevan Mendis were recalled. Chandimal was Sri Lanka's one-day international captain as recently as October, while Tharanga led the side in 2017. Tharanga's fellow opener Danushka Gunathilaka also failed to make the cut, while Lahiru Thirimanne, who last played in the format at the end of 2017, was drafted in. "We have an issue with opening batsmen. This is the reason why we went for experienced openers. We need that experience in England," chief selector Ashantha de Mel told reporters. "The openers were not in form. They were not among the runs in the last 10 games and they had failed. So we had to take a decision on the openers." Jeffrey Vandersay was picked over mystery spinner Akila Dananjaya as the only specialist slow bowler, with Sri Lanka's selectors rewarding the leg-spinner's strong performances in a recent domestic 50-over tournament. "We can't take two offspinners to the World Cup, and right now we are considering Dhananjaya de Silva as an offspinner," de Mel said. "Since Akila remodeled his action, Dhananjaya gets wickets at a much better strike rate than Akila, and he also turns the ball more than Akila." Opening batsman Avishka Fernando, 21, survived the axe despite a below-par tour of South Africa recently. But regular wicketkeeper-batsman Niroshan Dickwella was dropped. The 1996 champions on Wednesday had appointed test captain Dimuth Karunaratne as the skipper for the May 30-July 14 World Cup despite the left-handed batsman not playing an ODI since the 2015 tournament. Karunaratne's leadership in Sri Lanka's spectacular test series win in South Africa tilted the scales in his favour. The selectors continued on that note by bringing back Jeevan Mendis, who also last played in the format at the World Cup four years back in Australia and New Zealand. Siriwardana and Vandersay last played ODIs in October 2017. Pace bowler Lasith Malinga, who led the side in a 5-0 ODI series thrashing at the hands of South Africa recently, kept his place alongside the injury-prone paceman Nuwan Pradeep. "We have tested him (Malinga). He is a world class player," Sri Lanka Cricket President Shammi Silva said. "But sometimes, a world class player may not be a good captain, and a good captain may not be a world class player. Country comes first, not the names." Former captain Angelo Mathews, who missed a lot of cricket recently due to injury and was also dropped last year due to fitness concerns, was part of the 15-man squad. Sri Lanka open their World Cup campaign against New Zealand on June 1. Squad: Dimuth Karunaratne (captain), Avishka Fernando, Lahiru Thirimanne, Kusal Perera, Kusal Mendis, Angelo Mathews, Dhanajaya de Silva, Jeffrey Vandersay, Thisara Perera, Lasith Malinga, Isuru Udana, Suranga Lakmal, Nuwan Pradeep, Jeevan Mendis, Milinda Siriwardana
#Dinesh Chandimal #Upul Tharanga #Lahiru Thirimanne #Milinda Siriwardana #2019 Cricket World Cup
You May Also like: