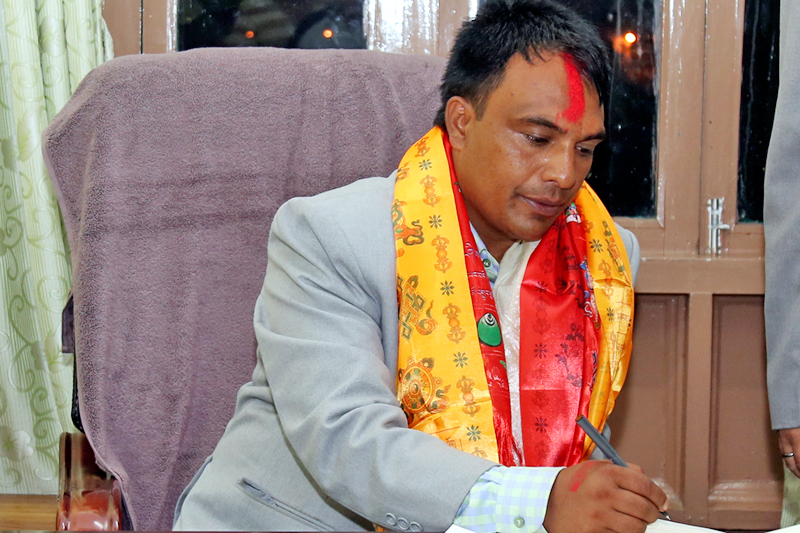 Newly appointed Minister for Youth and Sports Daljit Shreepaili assumes office in Singha Durbar in Kathmandu, on Thursday, August 4, 2016. Photo: RSS
Kathmandu, August 23 Minister for Youth and Sports Daljit Sripali said that new sports policies would be introduced during his stay at the ministry. Minister Sripali said so during an interaction programme organised by Nepal Sports Journalists Forum (NSJF) today. “I will introduce the sports policy during my stay at the ministry despite the policies could seem to be of biased nature for some,” he said. Sripali also told that the Seventh National Games would be organised on scheduled time frame. National Sports Council (NSC) has decided to organise the national games in Eastern Development Region from November 23 to 30. Minister Sripali, who is also the chairman of NSC, informed that works for the 13th South Asian Games (SAG) would begin as soon as possible. “We will start work for the SAG after making a proper plan,” he added. Besides that Sripali said that he would work on players’ management from psychological aspect to provide positive messages about Nepali sports.
#Nepal Sports Journalists Forum #Nepali sports #Minister for Youth and Sports #13th South Asian Games #Daljit Sripali
You May Also like: