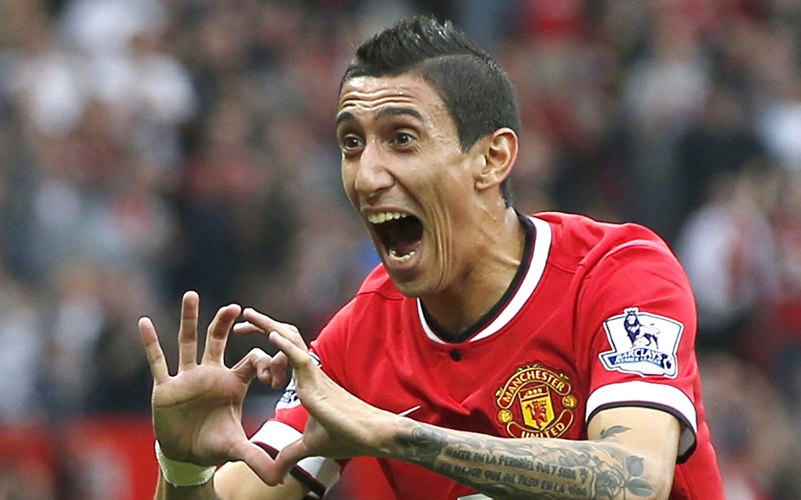 Manchester United's Angel Di Maria celebrates after scoring a goal against Queens Park Rangers during their English Premier League soccer match at Old Trafford in Manchester, northern England September 14, 2014. Photo: Reuters/File
Charlotte, July 26 The stage appeared to be set on Sunday for Manchester United midfielder Angel Di Maria to join Paris Saint Germain after spending just the one season at Old Trafford. The future of unsettled Argentine star was thrown into further doubt after it emerged that he had failed to join up with the club’s US tour as scheduled in California. United manager Louis van Gaal told reporters after his side’s 3-1 friendly victory over Barcelona that Di Maria had failed to board a flight to San Francisco. “I have heard that he’s not on the plane so I cannot say anything,” van Gaal said. “I have heard that he was not on the plane,” he reiterated. Di Maria had been excused from the first part of United’s tour after playing in the Copa America. Shortly afterwards, PSG manager Laurent Blanc said in Charlotte, North Carolina where the French champions lost on penalties to Chelsea, that transfer talks were well underway. “It’s a very long, drawn-out affair,” Blanc said. Di Maria joined United last year in a $92.6 million British record transfer from Real Madrid but has failed to settle during a difficult first season with the Premier League giants. L’Equipe newspaper on Sunday reported that a deal to bring Di Maria to Paris was imminent and that the transfer fee would be around $69million. Di Maria would be PSG’s big transfer move of the summer as they look to convert their domination of the domestic scene in France onto the European stage with a first-ever victory in the Champions League. Since the Qatar Sports Investments took over the running and financing of the club four years ago, a top player has been added to the squad each summer.
#Copa America #Premier League #Chelsea #Manchester United #Old Trafford #Angel Di Maria #Paris Saint-Germain #Louis van Gaal
You May Also like: