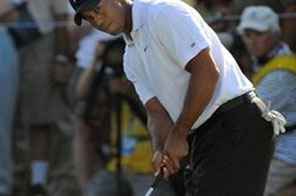 Spectators watch as Tiger Woods of the US putts on the green during the Pro-Am for the Australian Masters tournament at the Kingston Heath golf course, his first tournament in Australia for 11 years, in Melbourne, on November 11. Such has been the frenzy among spectators and media for Woods's first visit to Australia in 11 years that the chances of all his rivals have been largely ignored. Source: AFP

MELBOURNE: Tiger Woods may be one of golf's all-time greats and a clear favourite for this week's Australian Masters, but local hope Geoff Ogilvy said the Aussie contingent should not be discounted.
Tiger fever is raging ahead of the European Tour co-sanctioned event at Kingston Heath starting Thursday and bookmakers have installed the world number one a prohibitive 6/4 favourite to claim his career 93rd tournament victory.
Such has been the frenzy among spectators and media for Woods's first visit to Australia in 11 years that the chances of all his rivals have been largely ignored.
"It does seem that everyone seems to have given him (Woods) the tournament already," said Ogilvy, Australia's top-ranked golfer at 12 and listed a far-off second favourite at 10/1.
"He is obviously one of the best of all time, perhaps the best of all time.
"He is a master at working out new styles of golf, which this is going to be for him and whenever you go to a golf course that requires something extra, like Hoylake or St Andrews, he works it out better than everyone else.
But Ogilvy said he and the other Australians could count on local support and knowledge of the Kingston Heath sandbelt layout as they looked to achieve a shock victory over the 14-time major winner.
"The clear favourite doesn't always win and there's quite a few local guys who have played this style of golf more often and know this golf course a little bit better," he said.
"The local guys (also) have that added emotional home tournament drive to win it and so he is up against it this week to win, but he is definitely the favourite."
Aside from Ogilvy, some of the top Australian golfers at Kingston Heath this week are Adam Scott, a former top 10 ranked player now at 62, Michael Sim (59) Mathew Goggin (69) and defending champion Rod Pampling (102).
Ogilvy also pointed out that although Woods was the world's best, it was impossible to win every tournament.
"He is the winningest golfer ever and he still only wins 30 or 40 percent of the time he plays, so that's six or seven times out of 10 that he doesn't win," he said.
Woods, who was paid a reported three million US dollar appearance fee to play in Australia for the first time since the 1998 Presidents Cup, has been spending the past two days familiarising himself with the course.
He partnered three-time Australian Masters winner Craig Parry in practice and used his local knowledge to prepare how to play the course this week.
"Craig gave me a little bit of insight of how to play certain holes and where certain pins might be," Woods said.
"It was certainly very helpful. The greens are obviously pretty soft because it's so hot they're trying to save them for the tournament.
"But it's an unbelievable golf course. The bunkering is just phenomenal. You never get a chance to see bunkering like this in any other place in the world. It is a treat to play."
Woods said Kingston Heath offered golfers many playing options.
"You have to be able to shape the ball around the golf course, you have to be able to think," he said.
"The greens are much faster here than they are for the (British) Open Championship, but it's the same type of golf."
"I haven't played here and I'm trying to learn the angles, trying to learn the greens and where to miss the golf ball to give myself the best angle and best place to score from.
"Learning that will certainly be key."

#Tiger beatable in Australian Masters #says Ogilvy
You May Also like: