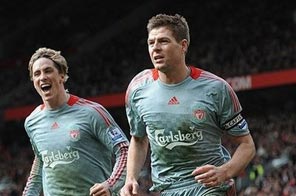 Spain striker Torres picked up a groin injury while away with his country and was an unused substitute for their final group match on Wednesday.

Both will now be sidelined this weekend as Rafa Benitez's side head to the Stadium of Light but could be available for the midweek Champions League tie with Lyon.

Benitez did receive one injury boost as Greece defender Sotirios Kyrgiakos could be back in 10 days despite reports claiming he would be out for six months after being injured playing for his country.

"Both Steven and Fernando still have some problems. They will need more time and won't be available this weekend. I think they could be available for next week," Benitez told Liverpoolfc.tv

"With Kyrgiakos we were really worried because people were talking about maybe six months, but after the scan we think one week to ten days. That's very positive."

#Torres and Gerrard to miss Sunderland trip
You May Also like: