Tottenham strike back for 1-1 draw with Liverpool 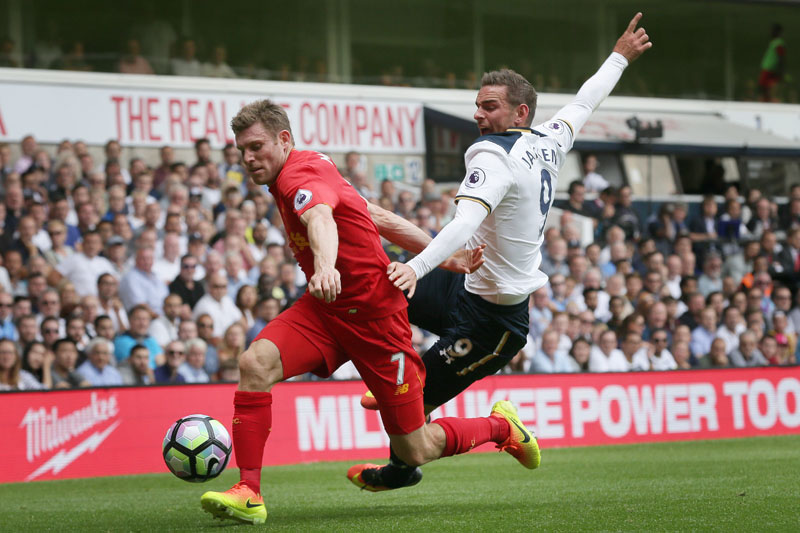 Liverpool's James Milner (left) beats Tottenham's Vincent Janssen to the ball during the English Premier League football match between Tottenham Hotspur and Liverpool at White Hart Lane in London, on Saturday, August 27, 2016. Photo: AP
LONDON: Liverpool drew 1-1 with Tottenham in its third straight away game to open the Premier League season after conceding a second-half equaliser by Danny Rose on Saturday. James Milner capped a dominant first-half display by Liverpool by converting a 43rd-minute penalty after Roberto Firmino was tripped by Erik Lamela. Rose preserved Spurs' unbeaten start to the season by scoring from one of his team's rare sights on goal, striking a slightly mis-hit shot inside the near post in the 72nd after Lamela flicked on Eric Dier's right-wing cross.

Liverpool's James Milner (left) beats Tottenham's Vincent Janssen to the ball during the English Premier League football match between Tottenham Hotspur and Liverpool at White Hart Lane in London, on Saturday, August 27, 2016. Photo: AP
Tottenham has five points from three games, one more point than a Liverpool side that has played all of its matches away from Anfield while the club completes the rebuilding of the Main Stand. Liverpool hosts Leicester at Anfield on Sept. 10. "It seems a long time since we've been there, it was a tough start as well," Milner said, referring to games against Arsenal, Burnley and Spurs. "Three points from four games — we probably could have had more." Both Tottenham and Liverpool have been tipped to challenge for the top four this season, but Spurs aren't yet showing the kind of form that almost took them to the title last season. Tottenham's winless run against Liverpool extended to eight league games — dating back to 2012 — and they couldn't handle the pace and energy of the visitors' sprightly forward line in a frenetic, entertaining first half at White Hart Lane. Sadio Mane was a constant menace, bringing three last-ditch tackles on him from Tottenham goalkeeper Michel Vorm in the "sweeper-keeper" role and having a goal disallowed near the hour mark for a narrow offside, which would have made it 2-0. Firmino — a midfielder playing up front — also found pockets of space and from one situation he got in front of Lamela, who clipped the Brazilian's heel and gave away a penalty. Milner sent Vorm the wrong way from the spot. By that time, Tottenham right back Kyle Walker had been substituted because he was feeling unwell, forcing a reshuffle with Dier going from center midfield into defense, and Liverpool deserved its halftime lead. Liverpool started the second half better, too, with Premier League debutant Joel Matip glancing a header against the crossbar from a corner, only for Spurs to equalize against the run of play. Rose didn't hit his shot cleanly but it crept inside the post, leaving Liverpool without a clean sheet so far this season. "Liverpool are a team who want to play and win titles," Tottenham manager Mauricio Pochettino said. "I think we are in the same way and it was a fair result."
#Liverpool #Roberto Firmino #James Milner #Tottenham #English Premier League season #Danny Rose
You May Also like: