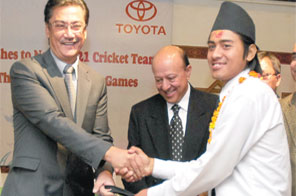 Suraj Vaidhya,President of United Traders Syndicate,handing over cricket kits to the Nepali Under-21 captain Gyanendra Malla as CAN President Binay Raj Pandey looks on during the farewell programme in Kathmandu on Friday. Source: NARESH SHRESHTHA/THT

KATHMANDU: Toyota has sponsored the national Under-21 cricket team participating at the 11th South Asian Games that started from Friday in Dhaka.
In a farewell programme for the national team, Suraj Vaidhya, President of the Toyota's authorised distributor United Traders Syndicate (UTS), announced the company's sponsorship worth Rs 400,000. In addition, Vaidhya also announced cash prizes of Rs 500,000 if the team bags a gold medal in the regional meet. He said the UTS would provide the team with Rs 200,000 for silver and Rs 100,000 for bronze. Vaidhya also handed over the cricket kits to the Nepali cricket team.
The Cricket Association of Nepal (CAN) President Binay Raj Pandey said that the CAN will also manage some rewards if the team wins medal. "Nepali cricket is privileged to play against the Test playing nations after the U-19 World Cups. If the team manages to bag any medal we would look forward to reward them," said Pandey, at the farewell programme.
Nepal will play a round robin league with Test playing nations Pakistan, Sri Lanka and Bangladesh along with Maldives. The top two teams will play for gold medal while the third and fourth teams will compete for bronze. India and Afghanistan pulled out from the regional meet.
Nepali team coach Arun Aryal, who is in the duty for the first time since he looked after the senior team in a three-day match against Singapore in 2005, said the team would focus on the performance more than targeting for medals. "It's going to be a tough tour for us because of the presence of Test playing nations but if we look at the nature of the game -- which is Twenty20 -- there is still a chance for us to win medal," said Aryal, who is also the chief selector.
Nepali team's skipper Gyanendra Malla said his team lacked spinners who could come handy in flat pitches like that of Bangladesh. "We have Anil Mandal and Chandra Saud who can turn the ball well but it's quite difficult to rely completely on them in such conditions," said the skipper. Malla said the team would miss the spin from Bibek Dali and Rahul BK who are capable of turning the ball in flat conditions. Apart from bowling, Malla said hard hitters like Pradeep Ayree, Binod Bhandari and Aakash Gupta need to click in order to get runs in Dhaka.
The 17-member team -- 14 players, two coaches and a team manager -- left for Dhaka today.

#Toyota sponsors SAG cricket team
You May Also like: