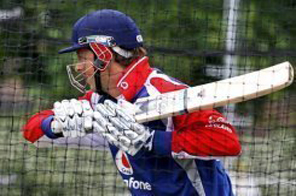 LONDON: Former England opener Marcus Trescothick, whose international career was ended by a stress-related illness that prevented him from travelling abroad, has been included in Somerset's squad for the Champions League in India next month.
Presuming he does travel, it will be the first time the 33-year-old has returned to the sub-continent since his condition resulted in him leaving England's tour of India in 2006.
Announcing their 15-man squad, Somerset said they were looking at ways to ensure that Trescothick was able to make the trip.
"Marcus Trescothick is in the squad as ways are sought to enable the former England opener to overcome the problems with travelling abroad to play cricket he has experienced as a result of his stress-related illness," a statement on the club's website said.
Trescothick was due to take part in Somerset's pre-season trip to the Middle East in early 2008 but only got as far as Heathrow Airport, having previously managed to play one tour match in Australia at the start of the 2006/07 Ashes series, before he decided he had to return home.
The batsman has since concentrated on playing for Somerset and helped them qualify for the India trip by finishing as runners-up to Sussex in this year's Twenty20 Cup.
Somerset, who will be captained by former Australia Test opener Justin Langer, begin the two-week tournament with a match against Deccan Chargers in Hyderabad on October 10.

#Trescothick set for India trip
You May Also like: