TAC off to winning start 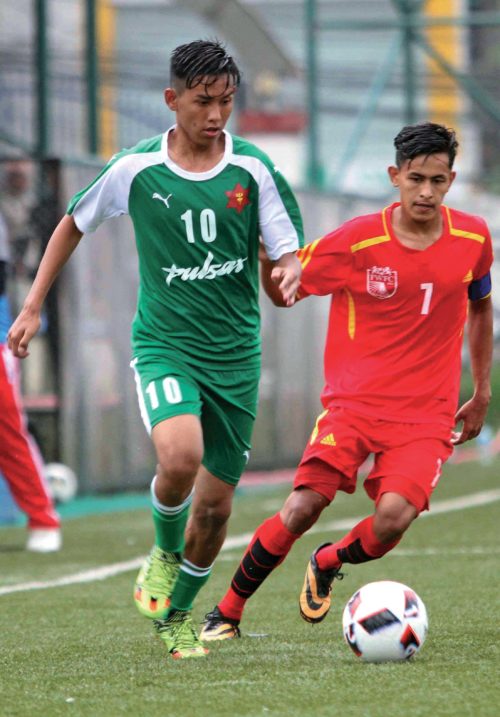 TAC's Prezen Tamang (left) and Far-western skipper Kamal Deuba vie for the ball during their Lalit Memorial U-18 Football Tournament match in Lalitpur on Saturday. Photo: THT
Kathmandu, May 27 Defending champions Tribhuvan Army Club made a winning start in the Lalit Memorial U-18 Football Tournament here at the ANFA Complex grounds today. TAC defeated Far-western Football Club 2-0 in the Group B match of the tournament organised by All Nepal Football Association in memory of its acting president Lalit Krishna Shrestha, who died of electrocution two years ago. Biswas Udas and Dorjee Tamang scored a goal each for the TAC who have a majority of ANFA Academy products. Udas opened the scoring in the 14th minute of the match before Tamang sealed the victory with a goal in the 65th minute. TAC coach Chakra Tamang was not satisfied with the victory margin. “We won the match but we should have won it with a better margin,” said Tamang. “My boys did not perform as expected in the match and they fumbled too many scoring chances,” he added. Far-west coach Lalit Chand said his players were a bit nervous in the opening match against the Army. “Unfortunately we had to play defending champions in the first match and the boys were also not used to in playing on the artificial turf,” Chand said. “We will definitely perform better in our next match,” added Chand. In the Group A match, Chyasal Youth Club played a 1-1 draw with Rumpum Jhapa-XI. Dishanta Rai put Jhapa ahead in the 31st minute of the match when he dodged a couple of defenders before firing into the top corner of the goal. At a time when the match was heading towards the end, Chyasal’s Mingma Tenzing converted a free kick to level the scores in the fourth minute of the injury time. Pramod Chaudhary brought down Susan Shrestha just outside the box and Tenzing earned a point for his club with a sensational strike. A total of 16 teams, divided into four groups, are taking part in the tournament. Top two teams each from all groups will advance to the quarter-finals. The winners and the runners-up of the youth tournament will receive Rs 300,000 and Rs 150,000 respectively, while the best goalkeeper, defender, midfielder, forward and coach will get Rs 10,000 each. Earlier, ANFA President Narendra Shrestha and Lalit Krishna Shrestha’s widow Nilu Shrestha inaugurated the championship.
#Tribhuvan Army Club #All Nepal Football Association #ANFA Complex ground #Lalit Memorial U-18 Football Tournament #Far-western Football Clun #Lalit Krishna Shreshtha
You May Also like: