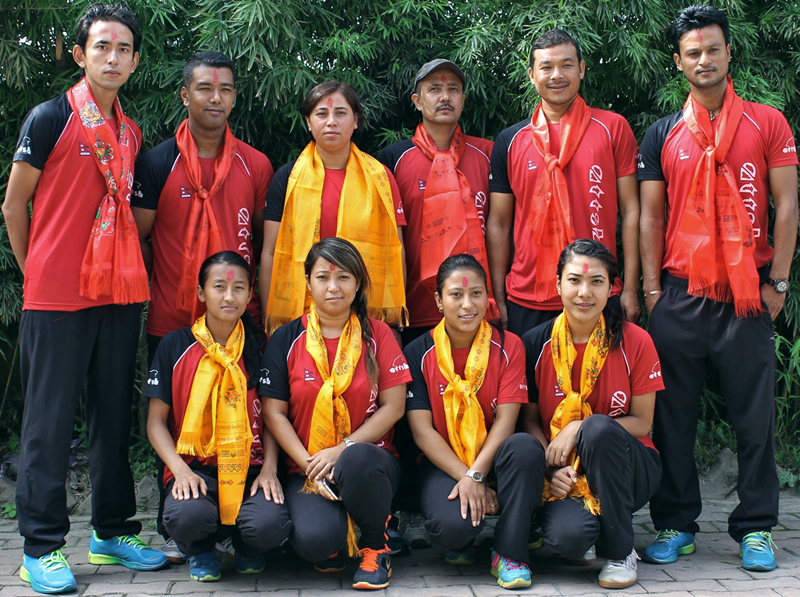 Players and official take group photo during their farewell to participate in the 22 nd Asian Table Tennis Championship in Pattaya Thailand slated from Sept 26 to Oct 3 at National Table Tennis Training Center at Lainchaur in Kathmandu on Thursday. Photo:THT
Kathmandu, September 24 A 10-member Nepali table tennis team is on Friday leaving for Thailand to participate in the 22nd Asian Championship, with the players setting their eyes firmly on improvement of ranking and earning the berth in the Worlds. The tournament, to be held in Pattaya from September 26 to October 3, will also serve as the selection tournament for the next year’s World Championship. “The primary target is to qualify for the world championship and also improve the individual world ranking,” said Nepal No 1 Deep Saun. Nepal are in Division-V in Asia and top 12 teams from the region would qualify for the World Championship, which will be held in Malaysia in February next year. “We had made it to the semi-finals in the last edition in our division and hope we can improve on that performance this time around,” said Saun. “We have put in a lot of hard works for the tournament and we are hoping to earn the berth for the World Championships,” he added. “As we will get the opportunity to play against top teams in Thailand and that will be a great platform for us to prepare for the upcoming South Asian Games,” said Saun. Team coach Sanjeev Kumar Dhungel was also optimistic of the positive results from the players. “The women’s team is a bit weak in the absence of top two players but the substitutes are also good,” said Dhungel. “We have chances to do better in both the categories in team events,” he added. Nepal No 1 Nabita Shrestha and No 2 Elina Maharjan opted out of the championship because the dates coincided with their exams. Selisha Khadgi and Erika Maharjan, who were picked up from selection, have joined No 3 Rabina Maharjan and No 4 Swechchha Nembang in the force. “We have taken this tournament as a platform to find out the weaknesses of the players as we will be participating in the SA Games in a couple of months time,” said Dhungel. “We will be playing against India in Thailand and also watch the games of Pakistan and Sri Lanka. We will get the opportunity to prepare our players accordingly after watching the game of regional opponents,” he added. Saun will lead the men’s team that includes No 2 Purushottam Bajracharya, No 3 Shiva Sundar Gothe and No 4 Amar Lal Malla, who will be playing his first Asian Championship. The team will miss the services of Ajay Suwal, who left for Australia to pursue higher studies few months ago. Olympian Sandhya Shakya, who is also the Member of the All Nepal Lawn Tennis Association, is the team manager. Nepal will participate in seven events — singles, doubles and team events in both categories and mixed doubles. The 19th ranked men’s team is in Group D along with hosts Thailand, Laos and Pakistan, while the women’s team, which is ranked 18th, is drawn in Group B along with India, Qatar and Pakistan. Member Secretary Keshab Kumar Bista and ANTTA President Chatura Nanda Rajbaidhya bade farewell to the team. “We are capable of beating top nations in sports and will power is the key for victory,” said Member Secretary Bista. “Government has done almost nothing for the development of sports and that should be changed for better results in the days to come,” said Bista.
#Thailand #World Championships. #TT players
You May Also like: