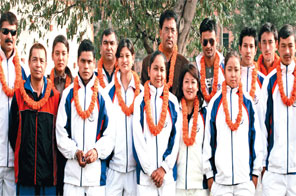 The Nepali table tennis team before their departure to India to participate in the 19th Asian Table Tennis Championships slated for November 16-22 in Lucknow. Source: Udipt Singh Chhetry

KATHMANDU: A 14-member Nepali table tennis team left for India to participate in the 19th Asian Table Tennis Championships slated for November 16-22 in Lucknow.
Purushottam Bajracharya, Shiva Sundar Gothe and Ajay Suwal will compete in the men’s events while Geeta Thapa Magar, Muna Basukala, Nabita Shrestha and Swechhya Nembang will take part in the women’s events.
Except for Shiva and Swechhya, all the other players have been selected for the 11th South Asian Games slated for Dhaka early next year.
Nepal will participate in the singles and doubles events in both the men’s and women’s sections along with mixed doubles events.
Deep Sawan and Alina Maharjan, who are also selected for the SA Games, also accompanied the team as observers.
All Nepal Table Tennis Association President Chaturananda Raj Baidhya is the team leader. Sushil Poudel and Naveen Suwal are the coaches of the team while international referee Shankar Prasad Gautam will officiate in the 32-nation championships.
Acting Member Secretary of the National Sports Council Min Krishna Maharjan and NSC Member Samim Miya Ansari bade farwell to the team.

#TT team leaves for Lucknow
You May Also like: