US suffer yet another sprint relay disqualification 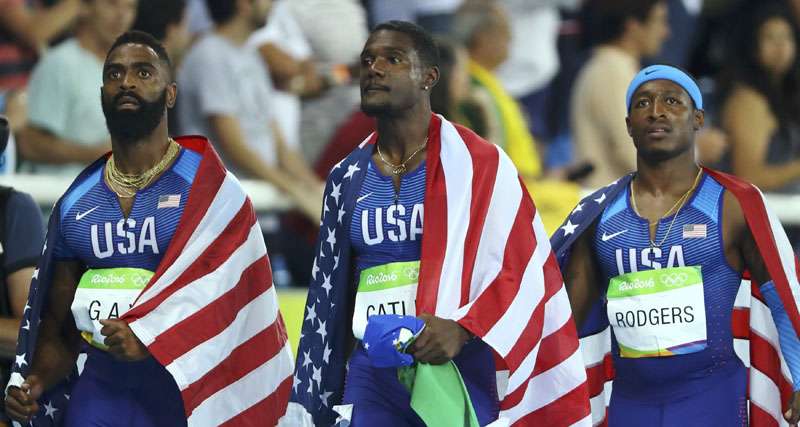 Mike Rodgers (USA) of USA, Justin Gatlin (USA) of USA and Tyson Gay (USA) of USA after being disqualified during 2016 Rio Olympics in Rio de Janeiro, Brazil, on August 19, 2016. Photo: Reuters
RIO DE JANEIRO: One might think that any American racing a men's sprint relay would take a moment before starting a lap of honor, such is the regularity of the subsequent crash-to-earth disqualification - and that is exactly what happened again at the Rio Games on Friday.
The flag-draped US quartet had already completed their lap of honor and were speaking to the media when news emerged that instead of taking bronze medals behind Japan and winners Jamaica they had been disqualified. The problem was a minor technical one at the first changeover between Mike Rogers and Justin Gatlin, as Gatlin touched the baton out of his zone but the result was disqualification. Incredibly, it was the ninth time since 1995 it has happened to the US in the Olympics and world championships, and they were also retrospectively disqualified three years after winning in London 2012 because of Tyson Gay's positive dope test. When they do get the baton round the track, the Americans invariably win, though they were never in the running on Friday once Jamaican sprint king Usain Bolt got into his stride in the anchor leg. Replays also showed a later US infraction after the last switch from Tyson Gay to Trayvon Bromel, who appeared to step out of his lane. "It was the twilight zone, it was a nightmare," said Gatlin. "You work so hard with your team mates, guys you compete against almost all year long. All that hard work just crumbles." Bromel was a little more phlegmatic. "Things happen. Nothing in this world is perfect," he said. "You go through bumps, ups and downs. That's what life is consisting of." America's loss was Canada's gain as they were promoted to third. "It's such a tricky game with the 4x100, you have to pass the baton and it takes great skill and there's a lot that can go wrong," said Canada's second-leg runner Aaron Brown. "It's like the hurdles, there's a lot that is required. You have to be very careful with your passes and sometimes it doesn't just take speed. "I'm just happy that we're on the good side of this DQ."
#Justin Gatlin #2016 Rio Olympics #2016 Olympics in Rio de Janeiro #Mike Rogers #US racing team #US athletes disqualified
You May Also like: