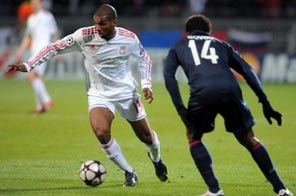 LONDON: Dutch winger Ryan Babel has reportedly threatened to walk out on Liverpool unless he gets more first-team football, adding to the sense of crisis gathering around Anfield in what has been a frustrating season to date.

Babel, an 11.5-million-pound signing from Ajax two years ago, is unhappy with the number of matches he has started and has risked incurring the wrath of manager Rafael Benitez by criticising the manager's communication skills.
"I have tried to talk to the manager but it isn't of any use," he was quoted as saying in Tuesday's edition of The Sun. "I couldn't really do anything with the feedback Benitez gave me.
"We have agreed to look at my situation in the winter. If there's no improvement then, I have to be honest, I want to be somewhere else.
"I don't play a lot so I can't be happy and I can't cheer out loud. Sometimes I wonder how long I can sustain it but I will fight for my position - what else can I do?"
Babel, who has not travelled to Hungary for Liverpool's must-win Champions League match with Debrecen because of an ankle injury, added: "Isn't it unbelievable that in my first year I got chosen as Talent of the Year? And a season later I hardly play and without getting a proper chance."
The Dutchman suspects that his relationship with Benitez may have been affected by his decision to play for Holland at last year's Olympics in Beijing, which the manager opposed.
"I don't know if it has anything to do with my little trip to the Olympics. I know the manager wanted me to stay.
"Every time me or my agent (Willie Haatrecht) have a chat with him he stresses I can't leave and he believes in me. We have to trust he is telling the truth. Saying it is different to showing it."
Babel insists he can still be a star for Liverpool, although the Anfield faithful may take issue with his assertion that he has already shown that "plenty of times".
He added: "I know I could be further in my career but if nobody helps you, if they don't make it easier for you, then it is difficult."

#Unhappy Babel hints at Reds exit
You May Also like: