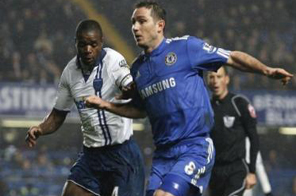 LONDON: Chelsea may come to regard their exit from the Champions League as a blessing in disguise.
Unlike the Londoners, Arsenal and Manchester United remain in the hunt for European football's biggest prize. But their participation in this week's quarter-final first legs came at a price with the two clubs' respective talismen, Cesc Fabregas and Wayne Rooney, both facing extended injury lay-offs.
After limping out of United's 2-1 defeat by Bayern Munich on Tuesday, Rooney was immediately ruled out of Saturday's potentially pivotal Premier League meeting with Chelsea at Old Trafford.
Fabregas will miss the rest of the domestic season after breaking his leg in Arsenal's 2-2 draw with Barcelona while centreback William Gallas and playmaker Andrey Arshavin will be out for three weeks with calf strains.
In contrast, everything suddenly looks rosier for a Chelsea squad whose season appeared to be unravelling last month as Inter Milan ended their interest in the Champions League and valuable league points were dropped in matches against Manchester City and Blackburn.
Last weekend's 7-1 thrashing of Aston Villa has put the spring back in the step of Frank Lampard and co. and they will travel north confident of completing a double over the champions following their 1-0 defeat of United at Stamford Bridge in November.
"We're looking forward to it," said England midfielder Lampard. "We've beaten United already this season as well as Liverpool and Arsenal and we played different formations in all of those matches. That shows the quality of the players we have.
"We had a bit of a dip last month but we have forgotten about that now and we are concentrating on the target."
Nicolas Anelka led the Chelsea forward line against Villa but it is safe to assume Didier Drogba will be back in the starting line-up at Old Trafford while the absence of Rooney presents Dimitar Berbatov with another opportunity to persuade sceptical United fans that he represents 30.75 million pounds of money well spent.
A United win would send Sir Alex Ferguson's side four points clear at the top with five matches to play while a draw would probably be the best result for Arsenal.
The Gunners go into their meeting with Wolves three points adrift of the leaders but with the advantage of a much more comfortable run-in than either of their rivals.
At the other end of the table, Hull will escape from the relegation zone -- for 24 hours at least -- if they can take anything from their trip to Stoke.
Hull's survival hopes have been bolstered by a controversial win over Fulham, who rested key players last weekend ahead of their Europa League quarter-final meeting with Wolfsburg, and a positive result at the Britannia Stadium will pile the pressure on to free-falling West Ham.
The Hammers have lost their last six league matches, a run which prompted manager Gianfranco Zola to contemplate quitting in the run-up to Sunday's daunting trip to Everton.
A defeat at home to Blackburn could ensure that Portsmouth's relegation from the top flight is confirmed by Sunday evening, depending on results elsewhere and Burnley will look very strong favourites to join them unless they can derail Manchester City's push for a Champions League place at Turf Moor on Saturday evening.
City's win over Wigan on Monday lifted Roberto Mancini's expensively-assembled squad back to within two points of fourth-placed Tottenham, who will come up against their former striker Darren Bent at Sunderland on Saturday.
Bent, who left Spurs in a 10-million-pound summer move, has scored 21 goals this season, 20 of them in the league, and has a point to make after being deemed surplus to requirements by Tottenham boss Harry Redknapp.
Among those hoping that he does will be Liverpool manager Rafael Benitez, who needs both Spurs and City to start dropping points soon if his under-performing squad, who visit Birmingham on Sunday, are to return to Europe's top table next season.
Fixtures (1400 GMT kick-offs unless stated)
Saturday
Arsenal v Wolves, Bolton v Aston Villa, Burnley v Man City (1630GMT), Manchester United v Chelsea (1145GMT), Portsmouth v Blackburn, Stoke v Hull, Sunderland v Tottenham
Sunday
Birmingham v Liverpool, Everton v West Ham (1500GMT), Fulham v Wigan

#United #Arsenal injuries hand Chelsea a boost
You May Also like: