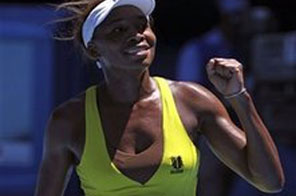 MELBOURNE: Venus Williams advanced to the Australian Open quarterfinals for the seventh time with a 3-6, 6-2, 6-1 win over Francesca Schiavone on Monday.

The sixth-seeded Williams, who lost the 2003 final to younger sister Serena in her best run so far at Melbourne Park, dropped a set to Schiavone for the first time in seven years but recovered to win a sixth consecutive match against the Italian player.

The Williams sisters are on track to meet in the semifinals, with top-ranked and defending champion Serena playing Australia's Sam Stosur in a fourth-round match later Monday on Rod Laver Arena.

Venus struggled to hold serve in the first set but was in command by the end, when she won the last six games after Schiavone broke her to open the third.

"Francesca was playing so well, she was so tenacious, she has so much speed," Williams said. "I had a little bit of a slow start."

Williams' win extends a streak in which at least one American woman has reached the Australian Open quarterfinals every year since 1977. She next plays the winner of Monday's later match between No. 16 Li Na of China and U.S. Open finalist Caroline Wozniacki of Denmark.

Four days after an angry outburst over the rules relating to replays and line calls, Andy Roddick got a crucial call in his favor in his fourth-round win over Fernando Gonzalez on Sunday.

Roddick bucked the trend on a day of upsets that also resulted in fourth-round exits for two of the top women: No. 2 Dinara Safina, last year's runner-up, and No. 3 Svetlana Kuznetsova, the reigning French Open champion.

"I got a little lucky, but sometimes it's better to be lucky than good," he said.

After wasting four set points in the 10th game of the fourth set, seventh-seeded Roddick rallied from 40-0 down in the 12th — Gonzalez' next service game — to earn a fifth set point. Then he hit the contentious, dipping crosscourt forehand.

The ball was called out and Gonzalez didn't take a swing. Roddick challenged the call immediately, and the evidence showed that the ball just caught the line, giving Roddick the set to level at two-all and igniting a protest from Gonzalez.

The Chilean argued that he could have had a play on the ball but chair umpire Enric Molina declined to replay the point.

The episode had a similar feel to the end of Roddick's second-round win over Brazilian Thomasz Bellucci, when he angrily objected to a decision that went against him on a match point.

"I know he was pretty upset about the challenge and that rule no one seems to know about," Roddick said of Gonzalez. "I can certainly sympathize with his frustrations."

Gonzalez refused to blame one disputed call for turning the match.

Roddick said the knee problem that sidelined him at the end of last season was bothering him a bit, but it didn't affect the game.

Safina had to retire because of the recurrence of a back injury when she was serving at 5-4 down and 30-40 against Maria Kirilenko, who had upset 2008 champion Maria Sharapova in the first round.

Kirilenko next plays 2008 Wimbledon semifinalist Zheng Jie, who became the first Chinese player to reach the quarterfinals at Melbourne Park with a 7-6 (6), 6-4 victory over Alona Bondarenko.

While the seeded players dropped, former No. 1 Justine Henin continued her run in her first Grand Slam tournament in two years with a 7-6 (3), 1-6, 6-3 win over fellow Belgian Yanina Wickmayer, keeping her on track for a quarterfinal meeting with Petrova.

Defending champion Nadal and No. 5 Andy Murray held off two of the tallest men and biggest servers in tennis to set up a quarterfinal match up.

No. 1 Federer and No. 3 Djokovic were playing fourth-round matches Monday.

#Venus Williams into Australian Open quarterfinals
You May Also like: