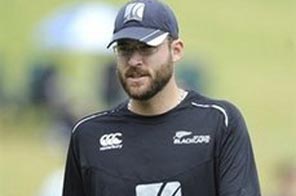 New Zealand's hopes for the three-Test series against Pakistan have been boosted by news Monday that captain Daniel Vettori has been cleared of injury fears. Source: AFP

WELLINGTON: New Zealand's hopes for the three-Test series against Pakistan have been boosted by news Monday that captain Daniel Vettori has been cleared of injury fears.
Vettori suffered a mild concussion in the one-day series against Pakistan in Abu Dhabi and did not go on to play in the two Twenty/20 matches in Dubai.
"He is feeling significantly better and will be available to play in the first Test starting on 24 November," New Zealand Cricket said in a statement.
Vettori also has a shoulder injury and was examined Monday by a specialist, who found some structural damage, although it was not expected to affect his ability to bowl.
"Physiotherapy rehabilitation exercises will assist with the ongoing management of this injury. It will not affect his availability for the Test series," the statement said.
But the news was gloomier for pace bowler Kyle Mills, who is expected to be ruled out from playing for at least four months, with hopes he will be back for the ICC World Twenty20 starting in April.
Mills is expected to undergo surgery in the next two weeks for an injury to his left shoulder. He will also have an operation on a chronic injury to his right knee, which has so far been managed without stopping him from playing.
Pakistan arrived in New Zealand Monday for the three Test series originally scheduled to be played at home on the sub-continent.
The series was moved due to security concerns following the attack in Lahore on the Sri Lankan cricket team in March, which left eight Pakistanis dead and injured seven Sri Lankans.
Pakistan has lost out-of-form batsman and captain Younus Khan for the series after he opted to rest after his side's one-day series defeat to New Zealand.

#Vettori cleared for Pakistan Tests
You May Also like: