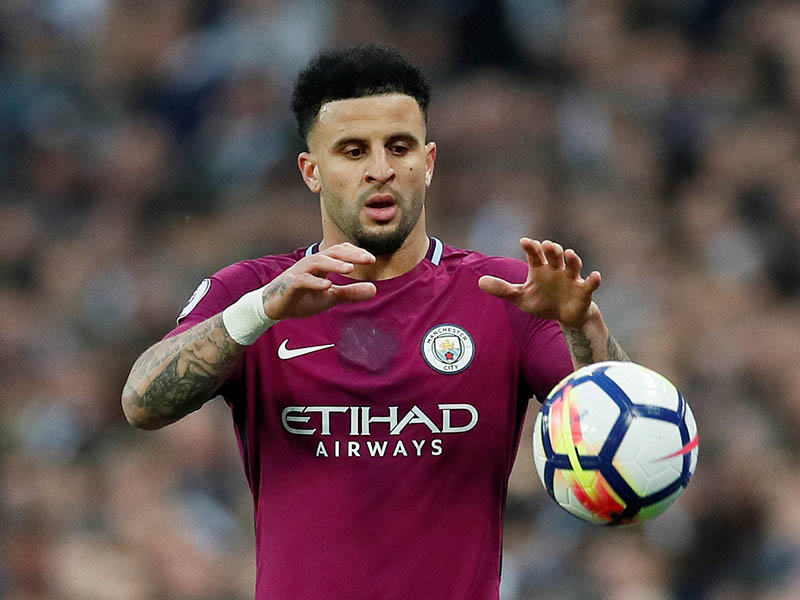 Manchester City's Kyle Walker prepares to take a throw-in. Photo: Reuters
LONDON: Newly crowned Premier League champions Manchester City need to continue winning trophies if they want to be regarded among the great teams of English top-flight football, defender Kyle Walker has said. City won their third title in seven seasons with five games to spare on Sunday after a record-breaking campaign that has seen manager Pep Guardiola's side outclass their rivals, but Walker believes there is potential to do more. "There is still a lot of room for improvement," England international Walker told BBC Radio 5 live. "I have read some articles that say we need to win things continuously for a number of years before we are classed as a great team. "Every single one of us wants to be recognised as one of the greatest teams to play in the Premier League." City's march to the title and their League Cup triumph in February has been offset by a shock FA Cup exit to Wigan Athletic and the 5-1 aggregate defeat by Liverpool in the Champions League quarter-finals. "If we concentrate on ourselves then as a team we can go on to great things," Walker added. "But the Liverpool game(s) showed us that we are not a perfect team." The 27-year-old also credited perfectionist Guardiola for City's free-flowing style of play, which has led to their domestic dominance. City can sweeten their title win by breaking several records in their five remaining league games, starting with Sunday's home match against struggling Swansea City.
#English Premier League #Man City #Kyle Walker
You May Also like: