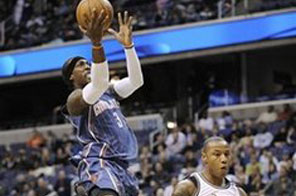 WASHINGTON: Gerald Wallace had 14 points and 14 rebounds, Tyson Chandler and Raymond Felton each scored 12 points and the Charlotte Bobcats rolled over the Washington Wizards 92-76 on Saturday night.

The win was the Bobcats' fourth straight — their longest winning streak since a five-game run from Feb. 25-March 7, 2009.

The Wizards failed in their attempt to win three in a row for the first time since April 2008.

Charlotte never trailed and held Washington to 13 points in the second quarter to take a 42-32 halftime lead. The Wizards missed 14 of their 18 field goal attempts in the quarter.

The Bobcats scored seven of the first nine points in the third to take a 49-34 lead with 8:19 to play. They led by as many as 22 late in the third quarter.

Charlotte, which had six players score in double figures, continued its run of outstanding defense. The Bobcats have allowed 100 points just once this season, and the 76 points scored by the Wizards equaled their lowest output of the season.

Both teams played on Friday night and the Wizards appeared especially drained.

Nick Young, who had two consecutive games of 20 or more points after being inactive for one game, was in early foul trouble and had just seven points.

NOTES: Charlotte coach Larry Brown said he was excited about the prospect of Allen Iverson returning to Philadelphia, where Brown coached him. "I don't think deep down he ever wanted to leave Philly," Brown said. "He's said, deep down, numerous times that's where he wanted to finish his career. Let's hope he has an opportunity to come back. If it's not Philly, somebody will pick him up. I'm confident of that." ... Wizards F Antawn Jamison thanked the crowd before the game for their sympathies on behalf of the late owner Abe Pollin, who died Tuesday. A message from NBA Commissioner David Stern was played on the scoreboard during the first quarter. ... Bobcats G Acie Law, who was acquired along with Stephen Jackson from Golden State on Nov. 16, was inactive. He's played in only one game since the trade.

#Wallace scores 14 as Bobcats beat Wizards 92-76
You May Also like: