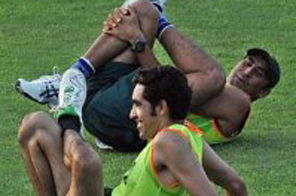 KARACHI: Pakistan captain Younus Khan on Wednesday urged his team to win the elite eight-nation Champions Trophy in South Africa, saying it would signal a fresh beginning in the nation's cricketing fortunes.
"The World Twenty20 success in England (in June) came at a time when the country and our people were in crisis. Now if we win the Champions Trophy it will be tantamount to a fresh beginning," Younus told AFP.
The Champions Trophy was originally scheduled to be held in Pakistan in 2008. It was first postponed to September-October 2009 over security fears before being relocated to South Africa after teams refused to tour Pakistan.
"It would have been best had the Trophy been played before our home fans, but it did not happen. Now I want my team to win the Trophy so that people can rejoice over another success," said Younus.
Younus led Pakistan to this summer's World Twenty20 title amidst crisis in the country, as suicide bombs killed hundreds of people and fighting forced millions to evacuate the Swat valley in North West Frontier Province.
Younus said if Pakistan won the Champions Trophy, which takes place from September 22 to October 5, it would signal renewed hope.
"We are fast coming out of the crisis and I hope that the win in the Champions Trophy will give us hope to build on the game which has suffered a lot in the recent past."
The whole nation celebrated a rare moment of joy when Pakistan beat Sri Lanka in the final to lift the World Twenty20 title on June 21.
Pakistan dedicated their win to the people of Swat and raised funds for those who were suffering there.
"At this point of time our country and team need more and more victories so that we remain amongst the top nations of the world. Winning the trophy is not the only aim. Taking the team to the top of the rankings is the aim," said Younus.
Pakistan lurks fourth in the official one-day rankings and a dismal sixth in the Test standings.
Younus said winning the major ICC (International Cricket Council) events was an imperative.
"I always believe that if a team wins a major ICC event, its standing and image gets better and my aim is to win the Champions Trophy and then the World Cup 2011, and I am confident that the team can achieve that."
Pakistan have never won the Champions Trophy since its inception in 1998. They lost in the semi-finals in 2000 and 2004 and lost in earlier rounds in 1998, 2002 and 2006.

#Younus urges Pak to win Champions Trophy
You May Also like: