Zinedine Zidane looking like a veteran at Madrid's helm 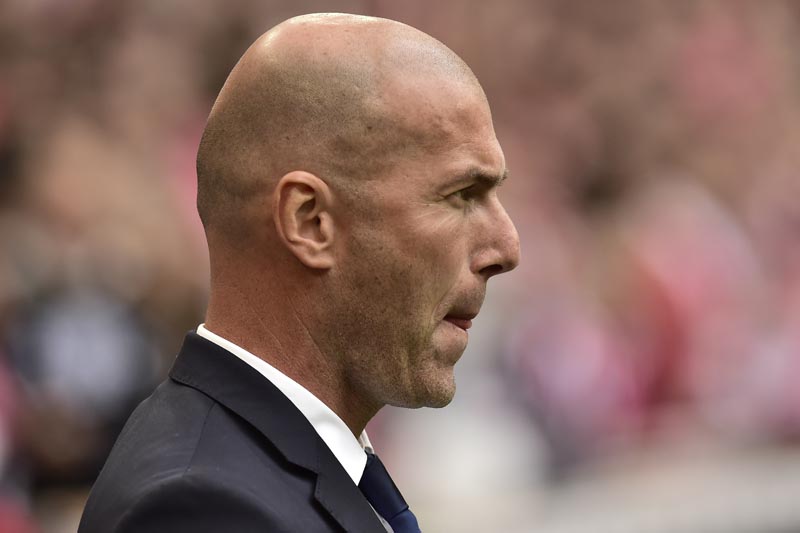 Real Madrid's head coach Zinedine Zidane watches the Spanish La Liga soccer match between Real Madrid and Athletic Bilbao, at San Mames stadium, in Bilbao, northern Spain, on Saturday, March 18, 2017. Photo: AP/ File
MADRID: Only 17 months into his first head-coaching job, Zinedine Zidane is one game away from winning his second Champions League title with Real Madrid. It would be an amazing feat for the former France great, who also helped Madrid win its first Spanish league title in five years, as well as the European Super Cup and the Club World Cup. All that in only his second season as a coach. "You were the best player in the world, and now you are simply the best coach in the world," Madrid president Florentino Perez told Zidane in a ceremony celebrating the team's first Spanish league title since 2012. "Thank you, Zizou, for everything that you have given us and for everything that you are still giving us." The 44-year-old Zidane also helped Madrid win the Champions League as a player in 2002, scoring an amazing volley in the final against Bayer Leverkusen in Glasgow, Scotland. "What I've been going through with this club has been spectacular," Zidane said. "I have the Real Madrid DNA, this is my house. No matter what happens, I'll always be a Real Madrid fan, it's the club of my life." Zidane has only one year left on his contract but no one expects him to be leaving anytime soon. "I want to stay and I think that the club is also happy with what we've been doing so far," Zidane said. "That's what really matters. Right now, I'm only thinking about Saturday. We'll see what happens after that." The Frenchman has been displaying the same calm as a coach as he showed when he netted that spectacular winner against Leverkusen in the 2002 final . Zidane replaced coach Rafa Benitez with the team in crisis early in 2016, and he got the squad back on track and has kept it competitive ever since. Always serene and speaking with in low tones, he gained the confidence of the players with his moves both on and off the field. "Zidane was my idol since I was very young, I had a poster of him in my bedroom," Madrid midfielder Marco Asensio said. "I'm proud to have him as a coach now, and it's amazing to be able to learn from him and to follow his advice." Zidane used several different formations and successfully resorted to rotations to keep his top players fresh at the important moments of the season. He gave a lot of playing minutes to the entire squad and kept them committed at all times. He even convinced Cristiano Ronaldo to skip games and get some rest, something unthinkable in previous seasons. "It's my philosophy, and I chose it because I have such a good squad," Zidane said. "It might have been different if I had other players. I did what I thought it was right with these players." One of Madrid's greatest players, Zidane also has a close connection with Juventus, his team's opponent in Saturday's final in Cardiff. He played two consecutive Champions League finals with the Italian club, losing both times, including to Madrid in 1998. Zidane spent five seasons in total with Juventus, winning two Serie A titles before moving to Madrid. The talented midfielder played more than 150 games with each of the clubs. Zidane was an assistant to Carlo Ancelotti when the Spanish club won the 2014 title against Atletico Madrid. He then took over Madrid's "B'' team before earning the chance with the main squad. On Saturday, Zidane will be trying to become the first coach to win consecutive Champions League titles. Madrid will look to become the first team to win back-to-back titles since the competition's new format was created in 1992-93. "It's the last game of the season, the most important one," Zidane said. "But we are going to prepare for it just like we prepared for the other matches that we played until now. We are not going to change anything." He will be hoping the result from last year's final doesn't change either, so he can add yet another title to his young coaching career.
#Champions League #football #Rafa Benitez #Carlo Ancelotti #Zinedine Zidane #Marco Asensio #Real Madrid head Coach
You May Also like: