Ibrahimovic strikes late for United to grab win at Palace 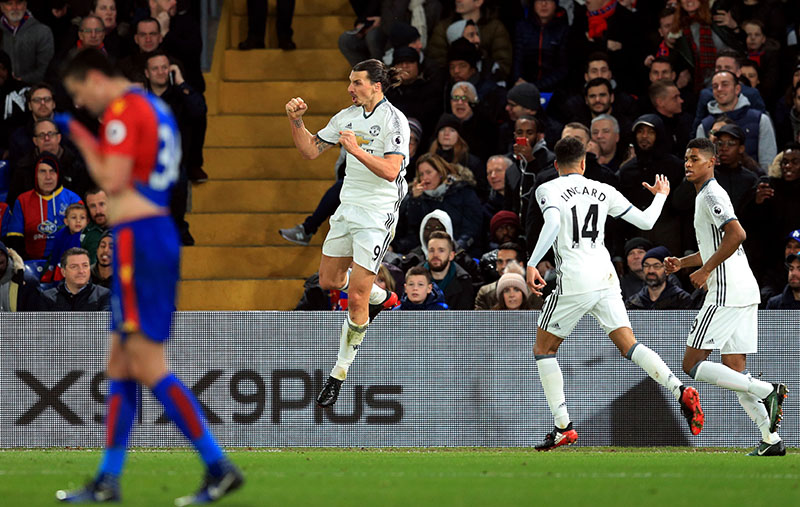 Manchester United's Zlatan Ibrahimovic celebrates scoring his side's second goal of the game against Crystal Palace during their English Premier League soccer match at Selhurst Park in London, on Wednesday, December 14, 2016. Photo: Adam Davy / PA via AP
LONDON: Prolonging his career in one of the toughest leagues, Zlatan Ibrahimovic's predatory instincts endure. Manchester United was facing a fourth draw in five Premier League games on Wednesday until Ibrahimovic pounced in the 88th minute at Crystal Palace to seal a 2-1 victory. Four months into his United career, Ibrahimovic already has 13 goals — and he even set up Paul Pogba for the first-half opener. After leaving Paris Saint-Germain, the 35-year-old striker could have taken the easy route and drifted toward retirement in one of the world's well-paid but less demanding leagues. Instead, the Swede took on the challenge of filling the number nine jersey at one of the world's biggest clubs. And Jose Mourinho's decision to add one of soccer's notoriously biggest egos to the squad is paying dividends after 23 games. "I told him England is not the best place to be on holidays for a rich guy," Mourinho said. "When a rich guy with a great career wants holidays he doesn't come to England. You come to England if you want to be in the most difficult league in the world, if you want to prove yourself, if you want to show what you can do. "So his decision to come here was based on that. So I am really happy because it's not just about goals — his goals, his leadership, his motivation, I am really happy with the big guy." That was clear at the final whistle when Mourinho embraced the man who restored United's lead after James McAthur's equalizer. Thanks to Ibrahimovic, Mourinho has consecutive wins in the league for the first time since August and United remains three points behind fifth-place Tottenham. Palace is only three points above the relegation zone after one win in 10 matches, perilous form for manager Alan Pardew who has spoken of his job insecurity in recent weeks. Palace was gifting United space and possession for much of the first half, rarely breaking out of its own half. What United lacked as Wayne Rooney made his first league start in a month was a significant threat up front but the captain was coming closest. A header from Rooney was off target and the striker's shot on the turn was repelled by goalkeeper Wayne Hennessey. United was fortunate to remain with 11 men after Marcos Rojo's two-footed challenge on former Old Trafford winger Wilfried Zaha. The defender escaped with a yellow card. "He's an aggressive, clean player," Mourinho said, "probably playing the best football of his career." It's not the best from Palace this season. In stoppage time at the end of the first half, Palace was punished by its inability to defend a set-piece but the hosts had legitimate grievances on two counts. Ibrahimovic initially appeared to chest down Juan Mata's free kick into the path of Pogba. Replays, though, indicated that Ibrahimovic's hand helped the ball along and Pogba was in an offside position when he turned the ball past Hennessey. The home fans were furious, jeering referee Craig Pawson at the interval. The players drew on the anger. Only United goalkeeper David de Gea at full stretch kept out McAthur's shot but he was beaten in the 66th minute. The leveler was stylish. Damien Delaney received the ball from Joel Ward, and a back-heeled flick-on enabled McArthur to slot past De Gea. United had a quick chance to regain the lead when Rooney's shot required a finger-tip save from Hennessey to keep the ball out the net. And if United was fortunate to benefit from refereeing decisions in the first half, the fortunes were now reversed. From the corner after Hennessey's save, Ledley raised an arm to block the ball. Pawson was surrounded by United players but no penalty was awarded. Mata did soon have the ball in the net but he was harshly adjudged to be offside when he met a downward header from Rojo. But there was no second reprieve for Palace when Pogba slickly threaded the ball through for Ibrahimovic's late intervention, ensuring United left south London relieved rather than furious.
#Manchester United #Crystal Palace #Zlatan Ibrahimovic
You May Also like: