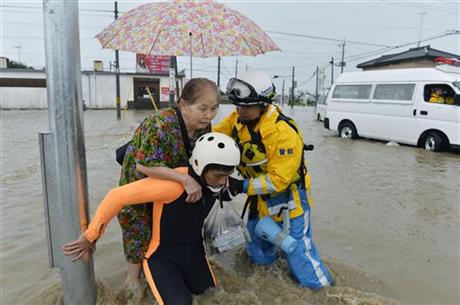 Police officers help a woman to evacuate through a flooded street in Joso, Ibaraki prefecture, northeast of Tokyo Thursday, Sept. 10, 2015. Photo: Reuters
TOKYO: Heavy rain pummeled Japan on Thursday for a second straight day, flooding hundreds of homes and causing landslides that left one person missing. Tokyo was drenched overnight, but the hardest-hit area was north of the capital in Ibaraki and Tochigi prefectures. One woman could not be found hours after a landslide hit houses at the foot of a steep, wooded incline. Bullet train service was partially suspended. Raging rivers overflowed their banks, knocking some homes off their foundations. Rescue workers used rubber dinghies to bring out residents trapped by floodwaters. The rain came on the heels of Tropical Storm Etau, which caused similar flooding and landslides Wednesday as it crossed central Japan. The Fire and Disaster  Management Agency said 15 people were injured by Etau, two seriously, both elderly women who were knocked over by strong winds.
#Japan #flood #The Fire and Disaster Management Agency
You May Also like: