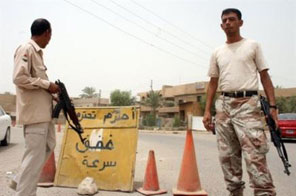 BAGHDAD: Gunmen dressed in Iraqi army uniforms launched execution-style attacks west of Baghdad on Monday, killing 13 members of a tribe who took up arms against Al-Qaeda, a villager and security official said
The gunmen swarmed into Seadan village, about 20 kilometres (10 miles) from Baghdad during the night and ordered six residents out of their houses, lined them up in a field and shot them dead, said Mohamed al-Zubaie, a resident.
The assassins then entered the home of Attala Ouda al-Shuker, a leader in the Sahwa (Awakening) movement of Sunni tribesmen who joined US forces in 2006, and shot dead three of his sons and four other relatives, Zubaie said.
"They killed three of his sons and four cousins," he said, adding that all those killed were members of the Zubaa tribe. The attackers then dumped the bodies at the local cemetery, he added.
"It was a group of Al-Qaeda and they were wearing Iraqi army uniforms," Zubaie said.
Major General Qassim Atta, spokesman for the Iraqi army's Baghdad operation, confirmed the toll. "The first indications we have is that 13 people were killed in a tribal conflict," he said.
An interior ministry official said armed men arrived in eight off-road cars resembling army vehicles during the night in Zuba district, of which Seadan is part.
They took 13 people and drove them to a cemetery a few kilometres (miles) away, where "eight were killed with a bullet in the head after being tortured and five had their throats slit," the official said.
A US army spokesman said he had received a report from the Iraqi authorities "of seven local nationals killed in that vicinity" but had no additional information.
The Sahwa, knows as the Sons of Iraq by the US military, are widely credited with turning the tide of the war against Al-Qaeda.
They have also been singled out by Al-Qaeda as being legitimate targets of violent attack.
Since the start of 2009, nearly all the Sahwas have been placed on Baghdad's payroll, and the government has said it will eventually absorb 20 percent of them into the security services and find public sector jobs for the rest.
But dozens of Sahwa members have been arrested in recent months amid warnings that they have no immunity from prosecution.
The Sunni militiamen have long feared that the Shiite-led government is determined to sideline them militarily and financially.

#13 anti-Qaeda men killed in Iraq
You May Also like: