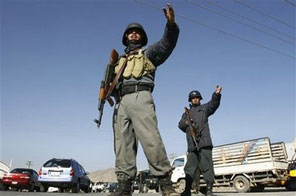 KABUL: A suicide bomber riding a motorcycle killed 13 people, including a police officer, and wounded 30 others Friday in a busy city square in western Afghanistan.

Several children were among those wounded in the morning explosion, said a doctor at the hospital in Farah city, Shir Agh Asas.

Provincial Governor Rohul Amin said the blast occurred about 55 yards (50 meters) from his compound in a crowded square in Farah.

"These days Taliban are causing high casualties because the foreign forces and Afghan forces have been conducting operations against the insurgency in the region," Askar said.

An operation three days ago in another part of the province killed five insurgents, including a Taliban commander and a bomb-maker, Askar said.

The violence comes a day after Afghan President Hamid Karzai, in his second inaugural address, said he has placed national reconciliation with insurgents at the top of his peace-building agenda.

"We invite dissatisfied compatriots, who are not directly linked to international terrorism, to return to their homeland," he said.

Karzai also set a five-year timetable for the Afghan security forces to take the lead in defending the nation, a goal that would allow international forces to take on more of a support role.

As the inaugural ceremony took place in Kabul on Thursday, a suicide bomber killed two U.S. service members in the southern province of Zabul, local officials and NATO said. Hours later, another suicide bomber blew himself up in a busy marketplace in another province, killing 10 civilians, including three boys, and wounding 13 other people.

Also Friday, three civilians were wounded by a roadside bomb in Khost province, according to Wazir Pacha, deputy police chief of Khost.