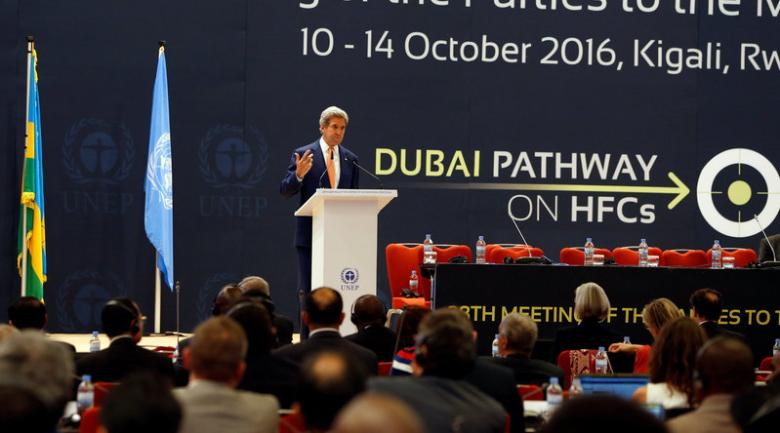 US Secretary of State John Kerrydelivers his keynote addres to promote U.S. climate and environmental goals, at the Meeting of the Parties to the Montreal Protocol on the elimination of hydro fluorocarbons (HFCs) use, held in Rwanda's capital Kigali, October 14, 2016. REUTERS
KIGALI: About 150 nations meeting in Rwanda agreed a global deal to reduce greenhouse gases used in refrigerators and air conditioners, a Rwandan minister announced to loud cheers on Saturday, a major milestone in combating climate change. The deal, agreed by US Secretary of State John Kerry, divides countries into three groups with different deadlines to reduce the use of factory-made hydrofluorocarbon (HFC) gases, said Minister Vinncent Biruta. Developed nations, including much of Europe and the United States, commit to reducing their use of the gas by 10 percent by 2019. Two groups of developing countries will freeze their use of the gas by either 2024 or 2028, and then begin gradually reducing it.
#United States #Rwanda #John Kerry #greenhouse gas
You May Also like: