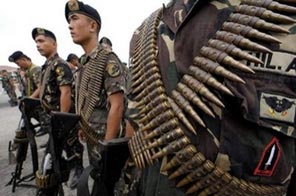 MANILA: Twenty-one people who were among a group of local politicians and journalists abducted in the southern Philippines on Monday have been found dead, the region's military chief said.
"Our army troopers have reached the area where the vehicles and those held were taken... they were shot by the armed men," Major General Alfredo Cayton said in a radio interview.
"We have recovered 21 bodies. Our men are continuing to scour the area to find the others."

#21 dead in Philippine hostage crisis
You May Also like: