4 US soldiers killed in Afghan 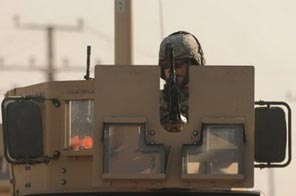 A US soldier mans an armoured vehicle at the site of a suicide attack in Kabul, Afghanistan. Source: AP

KABUL: Bomb attacks and a firefight killed four U.S. troops in 24 hours in Afghanistan, the military said Monday, adding to the growing toll as NATO and the U.S. consider whether to send more forces to the war.
Three of the Americans died in southern Afghanistan on Sunday, NATO said in a statement. Two of them were killed in a bomb attack and the third in a separate firefight.
The statement said a bomb killed the fourth American in the east Monday.
The deaths bring the number of Americans killed in Afghanistan in November to 15. October was the deadliest month for U.S. troops in the eight-year war, with 58 dead.
Meanwhile, Afghan officials said three Afghan soldiers were killed by a roadside bomb in southern Helmand province.
The Defense Ministry said the bombing occurred on Sunday in Musa Qala district. It did not give further details and it was not clear if there was any connection between the Afghan deaths and the American deaths.
In Brussels, NATO said Monday it wants allied nations to commit more forces to Afghanistan ahead of a U.S. decision on whether to send more troops.
NATO Secretary-General Anders Fogh Rasmussen is in the midst of intense negotiations on getting more troops, equipment, funding and other resources for the newly established NATO Training Mission, spokesman James Appathurai said.
NATO currently has about 71,000 troops in Afghanistan, nearly half of them American. The U.S. military also has another 36,000 soldiers in Afghanistan who serve outside NATO under independent command.
The Obama administration is considering military proposals to send 10,000 to 40,000 additional U.S. troops to Afghanistan next year. An announcement is expected in the next two weeks after months of deliberations over the war.
Afghan President Hamid Karzai, inaugurated Thursday for a second five-year term, wants more U.S. help to secure his country against the Taliban-led insurgency.
Although several allies have said they will dispatch some reinforcements, most NATO nations have so far shied away from making firm commitments.

#4 US soldiers killed in Afghan
You May Also like: