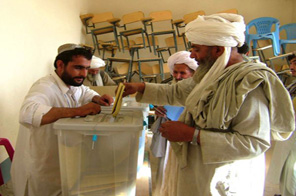 KABUL: Afghanistan's deputy chief electoral officer said Monday that punishment for vote rigging should be the same as for terrorism and drug trafficking as fraud allegations overshadowed the country's elections.
Partial results released on Sunday in a laborious piecemeal process showed President Hamid Karzai leading with 48.6 percent of the vote, well ahead of his nearest rival Abdullah Abdullah with 31.7 percent.
Karzai is still short of the 50 percent plus one vote needed to secure an outright victory and avoid a second round run-off.
The Independent Election Commission (IEC) announced results from 74.2 percent of the polling stations used in only Afghanistan's second direct presidential election.
The next results are due to be released on Tuesday, the IEC said, with final results not due before September 17.
Following revelations that votes from 447 polling stations across the country -- around 200,000 votes -- were nullified because of fraud, Afghanistan's deputy chief electoral officer, Zekria Barakzai, called for stricter punishment for vote rigging.
"In most democratic countries the punishment for election fraud is equal to that for terrorism and drugs but unfortunately this is not the case under our law.
"If we had such strong laws, we would willingly punish whoever is responsible for vote fraud," he said.
The election process has been marred by widespread allegations of fraud, with Abdullah at the forefront blaming Karzai for trying to buy another five years in the top job.
The Electoral Complaints Commission (ECC) has received more than 2,000 complaints, around a third of which it says could impact the outcome of the election.
Barakzai said IEC teams had found suspicious ballot boxes in a number of polling stations, but would not go into detail about which candidates had been favoured.
He did say many votes had been "marked with one pen in favour of the same candidate and entire ballot books dropped into boxes without the pages being torn off".
"I think it is a serious issue and so we have decided to nullify those votes," he said, adding that most of the fraudulent votes were found at sites in Paktika, Ghazni and Kandahar provinces, considered Karzai's heartland.
The IEC said on Sunday that each polling site had around 600-700 ballots, so the cancelled ballots "could be around 200,000 votes".
The total number of polling sites was 25,450, a spokesman told AFP, adding that votes had been counted from 18,877 sites, leaving those from 6,573 sites to be counted.
A report in the New York Times on Sunday said Karzai loyalists had set up hundreds of fictitious polling sites, where no one voted but hundreds of thousands of ballots were still recorded toward the president's re-election.
Citing unnamed senior Western and Afghan officials, the newspaper said there were as many as 800 such fake sites that existed only on paper.
Local workers reported that hundreds, and in some cases thousands, of votes for Karzai came from each of those places, the report said.
"We think that about 15 percent of the polling sites never opened on election day," the paper quotes a senior Western diplomat as saying. "But they still managed to report thousands of ballots for Karzai." Karzai's supporters also took over approximately 800 legitimate polling centres and used them to fraudulently report tens of thousands of additional ballots for the president, the paper said.
The result is that in some provinces, the pro-Karzai ballots may exceed the people who actually voted by a factor of 10, the paper said.
One commentator in Kabul said the election would have favoured Karzai without ballot stuffing, as he had polled well in regions considered Abdullah's strongholds, including northern provinces.
"Ironically Karzai is probably as annoyed as anyone about the fraud that's gone on because he would have won anyway," said Haroun Mir, of Afghanistan's Centre for Research and Policy Studies.
Abdullah has threatened not to accept a compromised vote and has called for intervention from the international community.
Concerns about the levels of fraud are seen behind the call on Sunday for an international conference on Afghanistan from the leaders of Britain, Germany and France.

#Afghan election official wants serious punishment for fraud
You May Also like: