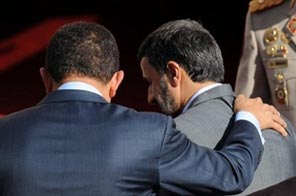 CARACAS: Iranian President Mahmoud Ahmadinejad vowed while standing next to President Hugo Chavez that Iran and Venezuelawould "stand together until the end" in the face of US "imperialism."
Ending a tour of Latin American allies, Ahmadinejad praised his "brave brother" Chavez, saying: "Today the people of Venezuela and Iran, friends and brothers in the trench warfare against imperialism, are resisting.
"We'll stand together until the end," he yelled, raising Chavez's hand in front of the television cameras and shouting in Spanish: "Viva Venezuela! Viva Chavez!"
Before arriving in Caracas late Tuesday Ahmadinejad was in Bolivia, where he and President Evo Morales, another close Chavez ally, hailed their own alliance against "imperialism," meaning the United States.
The Iranian leader's three-day regional tour has been seen as a clear affront to Washington, a fact illustrated by an unusual letter sent by US President Barack Obama.
After Ahmadinejad's first stop in Brazil, it emerged that Obama had sent a letter to the regional power urging it to be more critical of theIslamic republic and its suspect nuclear activities.
The letter, written to Brazilian leader Luiz Inacio Lula da Silva on the eve of Ahmadinejad's visit, outlined Washington's foreign policy goals and opposition to Iran's nuclear program.
After receiving the letter on Sunday, Lula went ahead Monday and recognized Iran's right to develop nuclear energy, although he urged Tehran to seek a peaceful settlement in talks with Western powers.
US State Department spokesman Ian Kelly confirmed Obama's letter on Wednesday and also urged Venezuela to join world powers in expressing concern over Iran's pursuit of a "nuclear weapons capability, its support of terrorism, and its human rights record."
Chavez, long a thorn in the side of Washington, has publicly backed Iran's right to a peaceful nuclear program and supported the Iranian leader's disputed re-election in June that led to days of violent protests in Tehran.
He said he had made a "lightning" visit to Cuba on Tuesday, where he met for seven hours with ailing former president Fidel Castro, who told him to deliver a big "hug" to Ahmadinejad on his return to Caracas.
"Fidel told me: 'tell Ahmadinejad that reaching Venezuela is like reaching Cuba, because it's the same homeland. So I'm also welcoming you to Cuba, brother,'" Chavez said.
But Ahmadinejad was also greeted with anger from the Jewish community and the Venezuelan opposition, which held protests.
"Venezuela's democrats repudiate the visit of the undesirable Iranian dictator Mahmoud Ahmadinejad to Venezuela," the Table of Unity opposition group said, describing Ahmadinejad's alliance with Chavez as "dangerous."
A statement from Venezuela's Jewish community called Ahmadinejad an "ominous character" who could produce "greater misery for mankind."
Ahmadinejad's arrival in Venezuela came as Germany said there was "broad support" for a resolution at a meeting this week of the UN's atomic watchdog condemning Iran for concealing a second uranium enrichment plant.
Tehran and six world powers known as the P5+1 -- Britain, China, France, Russia, the United States, and Germany -- have been at loggerheads for weeks, failing to reach a nuclear fuel deal aimed at allaying Western concerns.
Iran denies it is seeking to produce an atomic bomb under cover of its civilian nuclear energy program.
On the economic front, Venezuela and Iran, both members of the Organization of the Petroleum Exporting Countries (OPEC), launched joint projects, including a binational bank, housing programs and bicycle, car and tractor assemblies.
Chavez and Ahmadinejad signed a dozen cooperation agreements in housing, farming, tourism and energy sectors and announced the opening soon of a direct, Caracas-Teheran air flight by Iran's Mahan Air -- "to bring us closer still," Chavez said.
"I'm looking forward to visiting you in Tehran next year to continue promoting our already historic brotherhood," Chavez told his guest.
"I'll be waiting for you in Tehran," said Ahmadinejad.