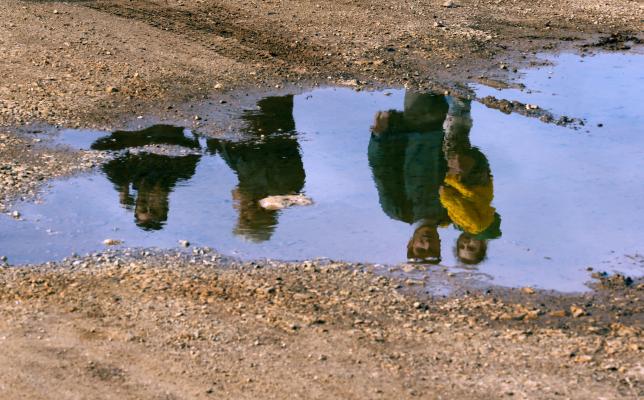 Syrian refugees are reflected in a puddle as they wait on a roadside after Turkish police prevented them from sailing off to the Greek island of Farmakonisi by dinghies, near a beach in the western Turkish coastal town of Didim, Turkey March 9, 2016. REUTERS

ANKARA: Turkey has illegally returned thousands of Syrians to their war-torn homeland in recent months, highlighting the dangers for migrants sent back from Europe under a deal due to come into effect next week, Amnesty International said on Friday.

Turkey agreed with the EU this month to take back all migrants and refugees who cross illegally to Greece in exchange for financial aid, faster visa-free travel for Turks and slightly accelerated EU membership talks.

But the legality of the deal hinges on Turkey being a safe country of asylum, which Amnesty said in its report was clearly not the case. It said it was likely that several thousand refugees had been sent back to Syria in mass returns in the past seven to nine weeks, flouting Turkish, EU and international law.

"In their desperation to seal their borders, EU leaders have wilfully ignored the simplest of facts: Turkey is not a safe country for Syrian refugees and is getting less safe by the day," said John Dalhuisen, Amnesty International's Director for Europe and Central Asia.

Turkey's foreign ministry denied Syrians were being sent back against their will. Turkey had maintained an "open door" policy for Syrian migrants for five years and strictly abided by the "non-refoulement" principle of not returning someone to a country where they are liable to face persecution, it said.

"None of the Syrians that have demanded protection from our country are being sent back to their country by force, in line with international and national law," a foreign ministry official told Reuters.

But Amnesty said testimonies it had gathered in Turkey's southern border provinces suggested the authorities have been rounding up and expelling groups of around 100 Syrian men, women and children almost daily since the middle of January.

Many of those returned to Syria appear to be unregistered refugees, though the rights group said it had also documented cases of registered Syrians being returned when apprehended while not carrying their papers.

Amnesty also said its research showed the authorities had scaled back the registration of Syrian refugees in the southern border provinces. Those with no registration have no access to basic services such as healthcare and education.

Under the deal with the EU, Turkey is supposed to be taking in migrants returned from Greece on April 4, but uncertainty remains over how many will be sent back, how they will be processed, and where they will be housed.

The aim is to close the main route by which a million migrants and refugees poured across the Aegean Sea to Greece in the last year before heading north, mainly to Germany and Sweden.

"The large-scale returns of Syrian refugees we have documented highlight the fatal flaws in the EU-Turkey deal. It is a deal that can only be implemented with the hardest of hearts and a blithe disregard for international law," Amnesty's Dalhuisen said.

#Turkey #Syria #Amnesty International #refugees
You May Also like: