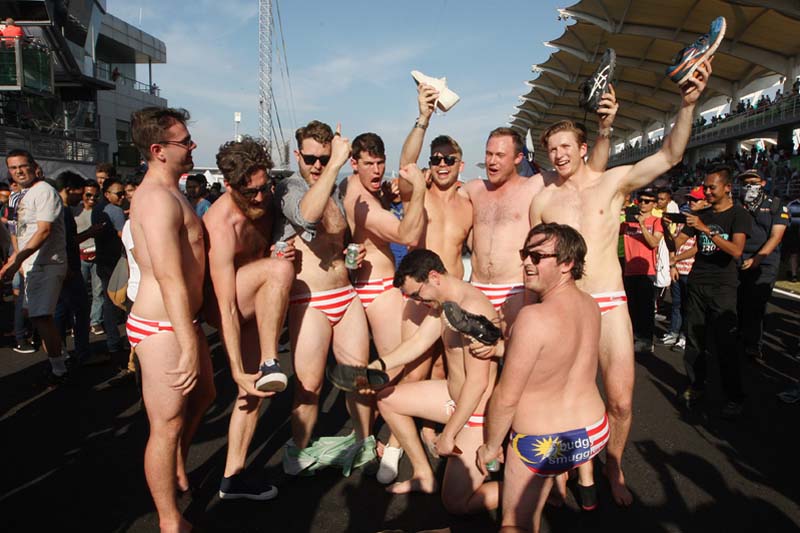 Australian men celebrate in Budgy Smuggler-brand swimsuits decorated with the Malaysian flag at the conclusion of the Malaysian Formula One Grand Prix in Sepang, Malaysia, on Sunday, October 2, 2016. Photo: AP
CANBERRA: Nine Australians, including a government adviser, who were in a Malaysian jail for stripping down to their briefs and drinking beer from shoes had now been arrested, the foreign minister said Wednesday.
The nine have been in police custody since Sunday when they stripped down to Budgy Smuggler-brand swimsuits decorated with the Malaysian flag in full view of thousands of spectators at the Sepang race track Sunday after Australian driver Daniel Ricciardo won the Malaysian Formula One Grand Prix. Foreign Minister Julie Bishop dismissed reports by some in the Australian media that the men's exuberant display was just a lapse of judgment. "It was clearly premeditated. They were wearing the Budgy Smugglers and had bought them in Australia," Bishop told Nine Network. Bishop said she had met Jack Walker, an adviser to Defense Industry Minister Chris Pyne, who was among the arrested men aged 25 to 29. Police say the men were being investigated for "intentional insult with intent to provoke a breach of peace" and public indecency. Police said the men face up to two years in jail, a fine or both if they are found guilty. Sydney's The Daily Telegraph newspaper dubbed the men the Budgie Nine, using a spelling variation of the abbreviated name of the budgerigar, a small Australian parrot. The name plays on nine Australians arrested in Indonesia for heroin trafficking in 2005 who became known as the Bali Nine. "Dear humourless Malaysia. Free the Budgie Nine," a front page headline said. Deputy Prime Minister Barnaby Joyce said Tuesday that the men's decision to strip down was inappropriate and ill-advised. "You're in another nation, you've got to be careful in what you do," Joyce told reporters in Canberra. "But I'm sure — well, I'm hoping — the Malaysians will understand that I don't think there's any real malice in it. Stupidity? Obviously. Malice? No."