Netanyahu tells settlers of worries of possible US action at UN 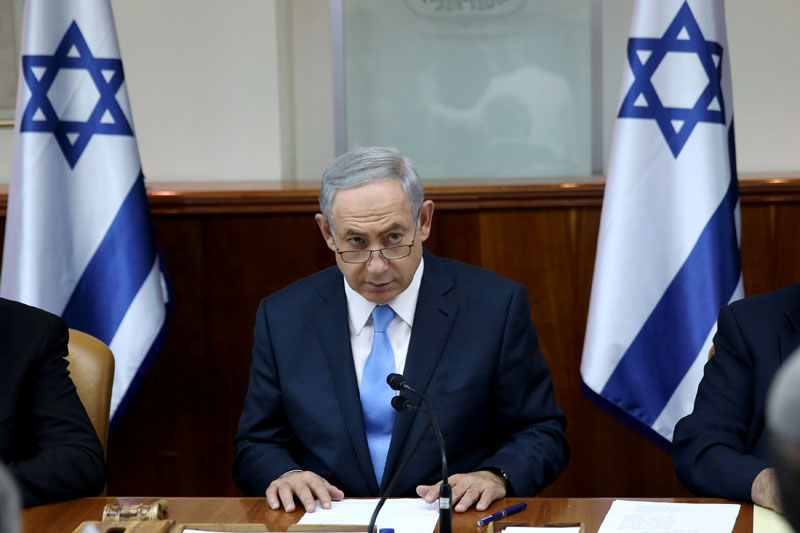 Israeli Prime Minister Benjamin Netanyahu opens the weekly cabinet meeting at his Jerusalem office moments after he was informed about a shooting attack in Jerusalem, on October 9, 2016. Photo: Reuters
JERUSALEM: Israeli Prime Minister Benjamin Netanyahu on Wednesday expressed concern that US President Barack Obama, during the final days of his term in office, might take diplomatic steps that could harm the fate of Jewish settlements in the occupied West Bank. Israel is concerned that the United States might not rally to its assistance in the event that an anti-settlement resolution is put to a vote in the United Nations Security Council and that Washington might not use its veto to quash such a move. Obama's strong opposition to settlement building on land Palestinians seek for a future state has also raised speculation in Israel that he might try to define parameters for a final peace agreement that has eluded Israel and the Palestinians since interim deals were signed in the early 1990s. Peace talks collapsed in 2014, with settlements a key issue in the dispute between the parties. A statement from Netanyahu's office clarified that he had told settlers in a closed meeting last week he hoped Obama would not act in the same way that some previous US administrations had done at the end of their term, when they had "promoted initiatives that did not align with Israel's interests". He did not specify any examples. The statement repeated what Netanyahu had already told Israeli reporters in New York following his address to the UN General Assembly last month when he said: "I can only hope that the US's consistent policy will continue to the end of his (Obama’s) tenure (on January 20)." It also denied what Israeli Channel 2 had ascribed to Netanyahu earlier on Wednesday when it quoted him as telling the settlers that "in the coming period, between the US elections and the end of the term of (US President Barack) Obama - the entire settlement movement is under threat." The United States has consistently criticised Israel over its West Bank settlement drive and earlier this month, Washington issued a strong rebuke at Israeli plans to build what it called a new Jewish settlement which it said would damage prospects for peace with the Palestinians. In unusually harsh words, Washington also accused Israel of going back on its word that no new settlements would be built. Obama raised concerns about the settlements when he met Netanyahu in New York. The United States contends that the project constitutes the establishment of a new settlement in the West Bank, contrary to assurances Netanyahu made to Obama that no new settlements would be built. Israel regards the planned homes as part of an existing settlement.
#Benjamin Netanyahu #Israel #Barack Obama #United Nations Security Council #: Bishal Sinjali
You May Also like: