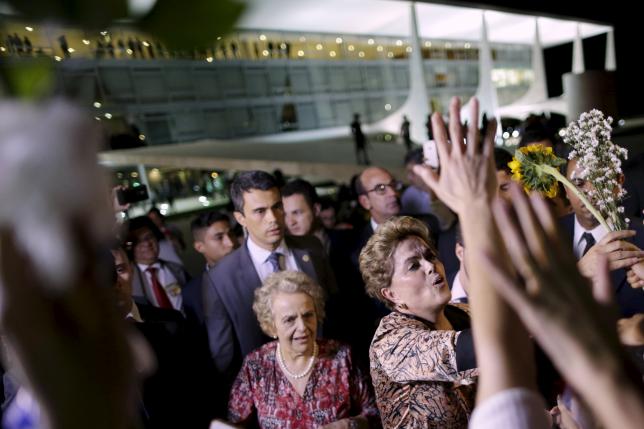 Brazil's President Dilma Rousseff greets women during a rally in support of her and against her impeachment in front of Planalto Palace in Brasilia, Brazil April 19, 2016. REUTERS
CURITIBA: In a Brazil deeply divided by the battle to oust President Dilma Rousseff, one sentiment unites ordinary people on both sides of the impeachment fight - outrage against corruption. Some worry a historic investigation uncovering huge graft scandals at state oil firm Petrobras (PETR4.SA) could be quietly quashed if, as expected, the Senate votes to put Rousseff on trial next month for breaking budget laws. Rousseff will be suspended by mid-May if the trial goes ahead and the party set to take over, the Brazilian Democratic Movement Party (PMDB), is as heavily implicated as her ruling Workers Party (PT) in the Petrobras kick-back schemes. But those leading the investigation insist they will not allow it to be hobbled or run out of steam. "Federal prosecutors and our own task force will fight ferociously for this investigation to continue to the end," Carlos Lima, a lead prosecutor for the Petrobras case, told Reuters this week in his modest, shared office in Curitiba. "We will not remain silent in the face of any attempts to strip us of this investigation." As part of its efforts, the anti-corruption task force is stepping up its calls for the public to defend the investigation, code named 'Operation Car Wash'. They are also demanding constitutional changes to hand the federal police more independence. Prosecutors, federal police and crusading federal Judge Sergio Moro have worked out of Curitiba to uncover a vast cartel of construction firms that conspired for years to siphon billions of dollars worth of kickbacks from Petrobras. Some of the money ended up in the hands of Rousseff's allies and high-profile members of the PMDB, which was until recently part of the ruling coalition. Rousseff has not been linked to the payment of bribes and her impeachment last Sunday was not connected to the probe, although it has battered public support for her government. Across the street from the federal court in Curitiba, where most of the case has played out, Marilza Scheidt, a 58-year-old housewife, has erected a small camp. Like many in Brazil, while she openly disdains Rousseff, she says those who may take her place are complicit in corruption. Wearing a T-shirt emblazoned with a photo of Moro, Scheidt hands out "I Support Car Wash" bumper stickers to passersby. "Car Wash opened Brazil's eyes, and regardless of political divisions I truly believe we all want one thing - a clean country," she said. "We must demand justice for the corrupt, or they will get away with it all." POLICE FORCE VULNERABLE The Car Wash probe has been politicized and Rousseff's government accuses investigators of being part of a plot to bring her down. The institution most vulnerable to politicians' retribution is the federal police, responsible for the bulk of the investigations. Under Brazil`s 1988 constitution, it lacks the same autonomy as federal prosecutors and the judiciary. Justice Minister Eugenio Aragao last month threatened to dismantle the Car Wash team if he got even a "whiff" they were responsible for a series of high profile leaks to the media. He warned that he required no actual proof to transfer police working on the case for years. "We've already seen threats against the investigation," said Carlos Sobral, president of the National Association of Federal Police. "We'll see political interference in our investigations if we don't have a constitutional amendment giving the federal police autonomy." A measure to do that has been before Congress since 2009 but has been ignored by successive governments. In the meantime, Sobral said, a new government could change the federal police team at will and even dismiss the head of the force. "We need the support of the Brazilian public to help protect us," Sobral said. For Lima, the achievements of Operation Car Wash will guarantee its survival. "This inquiry is spreading and will spread throughout Brazil," he said. "There will be an untold number of operations that derive from this work, that will follow this new model of investigation. It won't stop." Vice President Michel Temer, who will take over from Rousseff if she is removed from office, has said his government would not interfere with Operation Car Wash. Carlos Pereira, a professor of public administration at the Getulio Vargas Foundation in Rio de Janeiro, said strong public support for the probe would curtail the ability of politicians to undermine the police and judiciary. And Temer himself has weak support. Polls show that about 60 percent of Brazilians want him impeached too. "If Michel Temer or any other president decides to weaken these institutions, they will face a tremendous and direct political cost," Pereira said.
#corruption #Brazil
You May Also like: