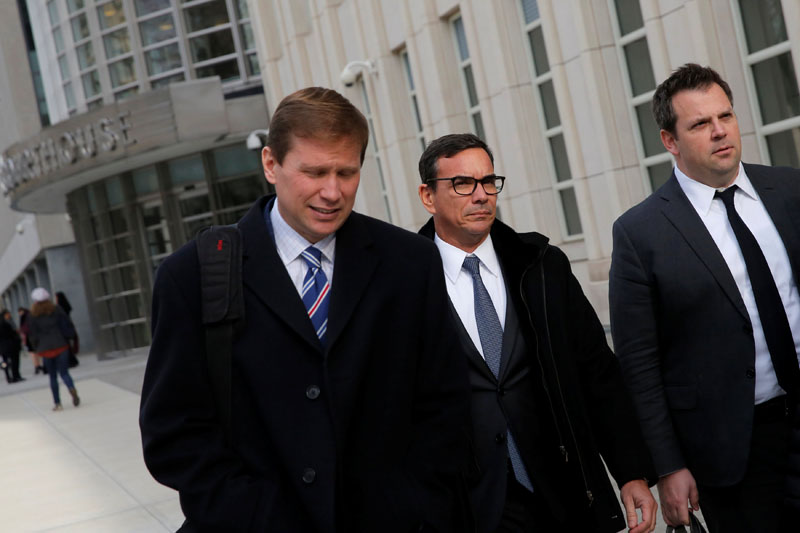 Adriano Juca, Diretor Legal of Construction Norberto Odebrecht (CNO), exits federal court after it was agreed that Odebrecht and petrochemical company Braskem would pay a settlement with the Justice Department in Brooklyn, New York City, US, December 21, 2016. Photo: Reuters
NEW YORK: Brazil-based construction colossus Odebrecht SA and affiliated petrochemical company Braskem SA agreed on Wednesday to pay at least $3.5 billion, the largest penalty ever in a foreign bribery case, to resolve international charges involving payoffs to Brazil's state oil company and others. Odebrecht and Braskem pleaded guilty in US federal court in Brooklyn to conspiring to violate a US foreign bribery law after an investigation involving political kickbacks at Brazil's Petrobras unearthed the bribery scheme. The huge penalty was negotiated as part of a broad settlement with US, Brazilian and Swiss authorities. Some of the hundreds of millions of dollars used in bribes to secure lucrative business deals flowed through the American banking system and some of the schemes were planned in the United States, enabling US authorities to claim jurisdiction in the case. Odebrecht is Latin America's biggest engineering firm. Braskem, the region's biggest petrochemical producer, is jointly owned by Odebrecht and Petrobras. Their guilty pleas were the first in the United States following a nearly three-year investigation in Brazil dubbed "Operation Car Wash" into corruption at Petrobras, which has led to dozens of arrests and political upheaval in Brazil. The total fines and penalties to be paid out by the companies exceeded a 2008 agreement in which German engineering company Siemens paid $1.6 billion to US and European authorities for paying bribes to win government contracts. Odebrecht and Braskem were charged with conspiring to violate the US Foreign Corrupt Practices Act, which is aimed at deterring companies from bribing officials overseas. "Odebrecht and Braskem used a hidden but fully functioning Odebrecht business unit - a 'Department of Bribery,' so to speak - that systematically paid hundreds of millions of dollars to corrupt government officials in countries on three continents," US Deputy Assistant Attorney General Suh said in a statement. From 2001 to 2016, Odebrecht paid approximately $788 million in bribes in association with 100 projects in 12 countries, including Brazil, Argentina, Colombia, Mexico and Venezuela, according to the US charging papers. The companies hid the bribes through carefully disguised payments routed through a network of shell companies as well as suitcases of cash left at preset locations, Suh said. The US Justice Department said the penalty to be paid by the two companies amounted to at least $3.5 billion, including $2.6 billion from Odebrecht and $957 million from Braskem. Brazilian authorities gave a lower figure for the overall deal but did not explain the discrepancy. US officials said most of the money would go to Brazilian authorities. Both companies also agreed to continue to cooperate with authorities, implement compliance improvements and become subject to oversight by external monitors. Odebrecht's former CEO Marcelo Odebrecht is already serving a 19-year sentence after being found guilty on corruption charges last year in Brazil, Latin America's biggest country. He turned state's witness and is expected to be freed by the end of 2017. 'TURNING THE PAGE' "The company is glad to be turning the page and focusing on its future," William Burck of US law firm Quinn Emanuel Urquhart & Sullivan, which represented Odebrecht, said in a statement. Fernando Musa, Braskem CEO since May, said his company also was pleased to be settling the matter. "We are implementing more robust practices, policies and processes across the organization," Musa said in a statement. According to US prosecutors, Odebrecht said it was able to pay $2.6 billion although it agreed the appropriate criminal fine would be $4.5 billion. The judge scheduled sentencing for April, when the deal would become finalized. Braskem also agreed to more than $632 million in criminal penalties and fines as well as additional money to the US Securities and Exchange Commission and Swiss and Brazilian authorities, the SEC said. In the sprawling "Car Wash" investigation, named for a Brasilia gas station where some of the money-laundering took place, prosecutors in Brazil have said more than $2 billion in bribes were paid over a decade, mainly to Petrobras executives, from construction and engineering companies. As part of the deal, Odebrecht agreed that 77 of its executives and employees would cooperate with the investigation, and they have already provided testimony expected to implicate upward of 200 Brazilian politicians. US prosecutors want to use testimony from Odebrecht employees to pursue more criminal cases that fall under their jurisdiction, according to two sources with direct knowledge of the Odebrecht deal. Former Brazilian President Luiz Inacio Lula da Silva, who Brazilian prosecutors say oversaw a scheme in which Odebrecht paid 75 million reais ($22.18 million) in bribes to win eight Petrobras contracts, is among those already charged in Brazil. The scandal also contributed to the downfall of Brazil's former president, Dilma Rousseff. She was ousted by Brazil's Senate in August, ending an impeachment process that polarized her country amid the massive corruption scandal and a brutal economic crisis. Michel Temer, Rousseff's vice president, then took over, but Temer himself has been cited in recently leaked testimony that Odebrecht officials have given, reportedly accused of accepting illegal campaign donations, allegations he has denied.
#Brazil #Dilma Rousseff #Brazil corruption #Michel Temer #Petrobras #Odebrecht SA #Braskem SA #Corruption penalty
You May Also like: