Brazil's Bolsonaro wants US to join development plan for the Amazon 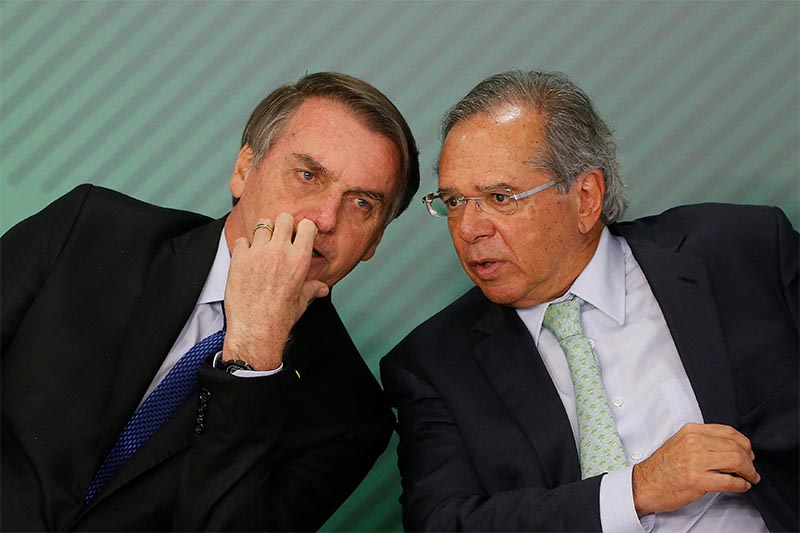 Brazil's President Jair Bolsonaro talks with Brazil's Economy Minister Paulo Guedes during a ceremony at the Planalto Palace in Brasilia, Brazil, on Monday, April 8, 2019. Photo: Reuters
SAO PAULO: Brazilian President Jair Bolsonaro said on Monday that he told US President Donald Trump that he wants the United States to take part in a joint development program for the Brazilian Amazon region, though he did not provide details. In an interview with radio station Jovem Pan, Bolsonaro again criticized demarcations of indigenous reserves in the Amazon, home to the world's largest rainforest, saying that they hamper development of the region, home to about 25 million people. Bolsonaro said he may reverse any demarcation that he legally can. "When I met Trump, I told him, among other things, that I want to open for them to explore the Amazon in a partnership," Bolsonaro said in the interview. He was in Washington for an official visit in March. The Brazilian president's view regarding the Amazon contrasts sharply with that of most environmental organizations in the country and abroad. Some green groups, such as Greenpeace, defend a total ban on any further deforestation in the region, including the share of land that could be legally cleared according to the Brazilian legislation. In the Amazon region, for example, a land owner is entitled to cut trees in 20 percent of the area, with an obligation to leave 80 percent of the vegetation intact. Bolsonaro thinks Brazil should open more areas to mining, including in the Amazon, and advocates for improvements in infrastructure such as paving roads that cut through forested areas, a move that environmentalists say could spur deforestation.
#United States #Venezuela #US government #AMAZON #US President Donald Trump #Jair Bolsonaro #Brazilian President #Venezuela army #Venezuelan Army #Brazilian Amazon region
You May Also like: