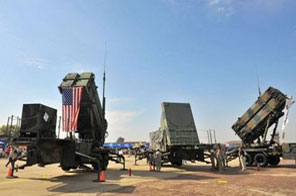 A US Army's Patriot Surface-to Air missile system is seen at the US airbase in Osan, S.Korea, in 2008. China urged Washington on Saturday to abandon plans to sell missile equipment to Taiwan, warning the move would violate its security and severely undermine trust between the US and Chinese militaries. Source: AFP

BEIJING: China urged Washington on Saturday to abandon plans to sell missile equipment to Taiwan, warning the move would violate its security and severely undermine trust between the US and Chinese militaries.

"The US arms sales to Taiwan infringe upon China's security interest as well as peace and stability across the Taiwan Strait, and interfere with China's internal affairs," Foreign Ministry spokeswoman Jiang Yu said in a statement.

A US official in Taipei said on Thursday the US Defense Department had approved the sale of Patriot missile equipment to Taiwan as part of a package passed by Congress more than a year ago.

The latest Foreign Ministry statement came hours after China's Defense Ministry issued a separate warning that it reserved the right to take unspecified further action if Washington followed through with the plan.

"The US side clings obstinately to the Bush administration's plan of arms sales to Taiwan, which severely undermines the mutual trust between the two militaries," Defense Ministry spokesman Huang Xueping was quoted as saying by the official Xinhua news agency.

"It also brings a severe obstacle to the improvement and development of China-US military ties. We reserve the right of taking further actions," he was quoted as saying.

When US President Barack Obama visited Beijing in November, the United States and China vowed to take "concrete steps to advance sustained and reliable military-to-military relations in the future".

The Foreign Ministry said it had raised "solemn representations to the US" over the matter.

"We urge the US to stop arms sales to Taiwan to avoid undermining China-US cooperation," Jiang said.

"We urge the US to clearly recognize the severe consequences of arms sales to Taiwan, reject the cold war mentality," she added.

The US Defense Department awarded Lockheed Martin Corp the contract to provide Patriot missile defence systems to Taiwan as part of a big arms deal approved by Congress in 2008, said a spokesman for the American Institute, the de facto US embassy in Taipei.

The US Defense Department said in a statement on Wednesday the contract for Lockheed Martin involved "basic missile tooling upgrades".

The Pentagon notified Congress in October 2008 of 6.5 billion dollars in arms sales to Taiwan, sparking condemnation from China.

The package included 330 Patriot Advanced Capability (PAC-3) missiles worth up to 3.1 billion dollars.

The contract now awarded by the Pentagon, which totals 968.7 million dollars and also covers deals not involving Taiwan, appears to be for only part of the missile sale announced in 2008.

Taiwan and China have been governed independently since the end of a civil war in 1949, but Beijing considers the island part of its territory and has vowed to get it back, by force if necessary.

Relations have improved since Taiwan's current administration assumed power in May 2008, pursuing a programme of stepping up economic ties.

#'Cancel weapons sales to Taiwan'
You May Also like: