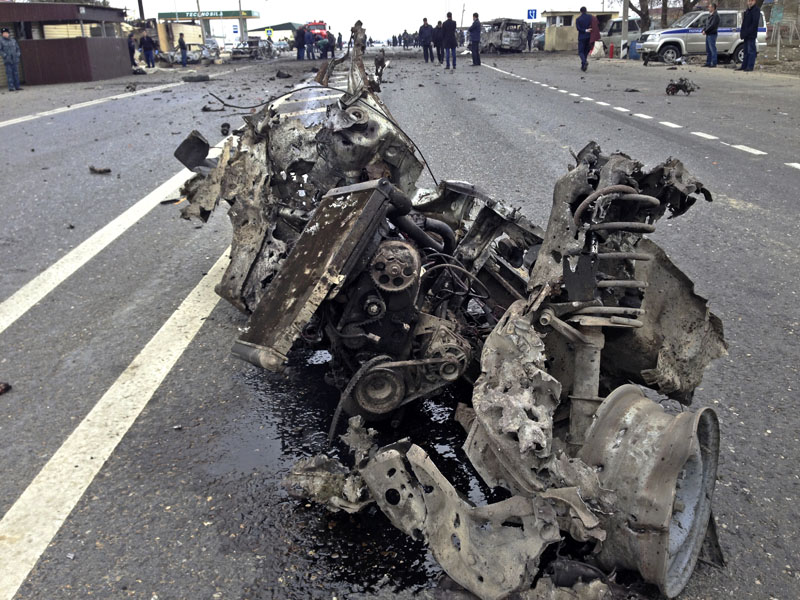 The wreckage of a suicide bomber car is seen near a traffic police check point near a village of Dzhemikent in Russian northern Caucasus region of Dagestan on Monday, February 15, 2016. Photo: Bashir Aliev/ NewsTeam photo via AP
MAKHACHKALA: A powerful car bomb exploded Monday at a police checkpoint in Russia's Dagestan republic, killing two officers and the car's driver and wounding 19 others, in what appears to have been a suicide attack, investigators said. The attack was organized by Islamic militants who have sworn allegiance to the Islamic State group, said Rasul Temirbekov, spokesman for the Dagestani branch of the federal Investigative Committee. The explosion, which was set off by two 122 mm shells, destroyed the Russian-made Lada Priori and four other vehicles parked at the police post near Derbent, he said. All that remained of the driver of the Lada were fragments of his head, hands and feet, the spokesman said. Dagestan has been the center of an Islamic insurgency that spread across the Caucasus region after two separatist wars in neighboring Chechnya. For more than a decade, Dagestan has seen bombings, attacks on police and kidnappings blamed on the Islamic militants. In recent years, many of the militants have proclaimed allegiance to IS, while at the same time the republic has grown markedly less violent as hundreds of them have left to join the IS in Syria. Some, however, are now coming back home with battlefield experience. While the returning fighters usually land in jail or are kept under close police surveillance, there have been concerns that the presence of radical Muslims trained in IS warfare could lead to greater instability and violence. Russian President Vladimir Putin has described the IS threat to Russia as a key factor behind his decision to launch air strikes on militants in Syria. He said that between 5,000 and 7,000 people from Russia and other former Soviet countries are now fighting alongside Islamic State militants. Meanwhile, Russia's air campaign in Syria has drawn threats of retaliation from militants there.
#Russia #Russian President Vladimir Putin #Islamic State group #car bomb #Islamic militants #Islamic insurgency #Caucasus unrest #Russia's Dagestan republic #Russian-made Lada Priori #air strikes on militants in Syria
You May Also like: