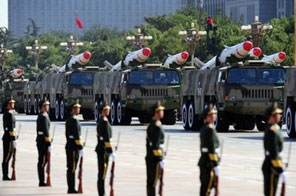 Chinese missiles are seen during a National Day parade in Beijing. China has successfully intercepted a missile in mid-flight, state media has said, in a test of its advanced air defence capabilities amid tensions over US arms sales to Taiwan Source: AFP

BEIJING: China has successfully intercepted a missile in mid-flight, state media said on Tuesday, in a test of its advanced air defence capabilities amid tensions over US arms sales to Taiwan.

"The test is defensive in nature and is not targeted at any country," it added.

The news comes shortly after a US official in Taipei said the Pentagon had approved the sale of Patriot missile equipment to Taiwan as part of a package passed by Congress more than a year ago.

Beijing -- which considers Taiwan part of its territory and has vowed to take the island back, by force if necessary -- has repeatedly voiced its protest over the sales and urged Washington to cancel the deal.

China's defence ministry had warned at the weekend that it reserved the right to take unspecified action if Washington followed through with the sale, which it called a "severe obstacle" to China-US military ties.

The United States is the leading arms supplier to Taiwan, even though it switched diplomatic recognition from Taipei to Beijing in 1979.

The Chinese government has poured money into its military in recent years as part of a major modernisation drive.

China's military spending rose 15.3 percent in 2009 to 69 billion dollars, according to a budget submitted to parliament in March, the latest in a string of double-digit increases.

The Global Times quoted senior military strategist Yang Chengjun as saying that the test had "ushered China into a new phase in terms of missile interception technologies".

"China needs an improved capability and more means of military defence as the country faces increasing security threats," Yang was quoted as saying.