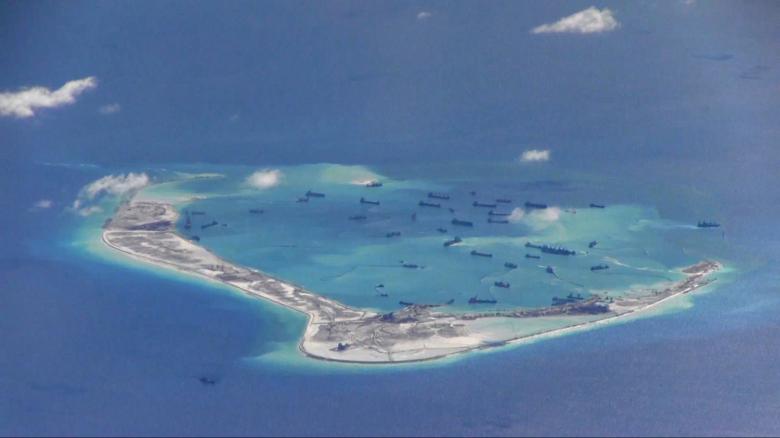 File - Chinese dredging vessels are purportedly seen in the waters around Mischief Reef in the disputed Spratly Islands in the South China Sea in this still image from video taken by a P-8A Poseidon surveillance aircraft provided by the United States Navy on May 21, 2015. Photo: US Navy via Reuters
WASHINGTON:  China, in an early test of US President Donald Trump, is nearly finished building almost two dozen structures on artificial islands in the South China Sea that appear designed to house long-range surface-to-air missiles, two US officials told Reuters. The development is likely to raise questions about whether and how the United States will respond, given its vows to take a tough line on China in the South China Sea. China claims almost all the South China Sea, which carries a third of the world's maritime traffic. Brunei, Malaysia, the Philippines, Taiwan and Vietnam also have claims. Trump's administration has called China's island building in the South China Sea illegal. Building the concrete structures with retractable roofs on Subi, Mischief and Fiery Cross reefs, part of the Spratly Islands chain where China already has built military-length airstrips, could be considered a military escalation, the US officials said in recent days, speaking on condition of anonymity. "It is not like the Chinese to build anything in the South China Sea just to build it, and these structures resemble others that house SAM batteries, so the logical conclusion is that's what they are for," said a US intelligence official. Another official said the structures appeared to be 20 meters (66 feet) long and 10 meters (33 feet) high. A Pentagon spokesman said the United States remained committed to "non-militarization in the South China Sea" and urged all claimants to take actions consistent with international law. The Chinese Embassy in Washington did not immediately respond to a request for comment. In his Senate confirmation hearing last month, US Secretary of State Rex Tillerson raised China's ire when he said Beijing should be denied access to the islands it is building in the South China Sea. Tillerson subsequently softened his language, and Trump further reduced tensions by pledging to honor the long-standing US "One China" policy in a Feb. 10 telephone call with Chinese President Xi Jinping. LONGER-RANGE Greg Poling, a South China Sea expert at the Center for Strategic and International Studies in Washington, said in a December report that China apparently had installed weapons, including anti-aircraft and anti-missile systems, on all seven of the islands it has built in the South China Sea. The officials said the new structures were likely to house surface-to-air missiles that would expand China's air defense umbrella over the islands. They did not give a time line on when they believed China would deploy missiles on the islands. "It certainly raises the tension," Poling said. "The Chinese have gotten good at these steady increases in their capabilities." On Tuesday, the Philippines said Southeast Asian countries saw China's installation of weapons in the South China Sea as "very unsettling" and have urged dialogue to stop an escalation of "recent developments." Philippine Foreign Secretary Perfecto Yasay did not say what provoked the concern but said the 10-member Association of South East Asian Nations, or ASEAN, hoped China and the United States would ensure peace and stability. POLITICAL TEST The US intelligence official said the structures did not pose a significant military threat to US forces in the region, given their visibility and vulnerability. Building them appeared to be more of a political test of how the Trump administration would respond, he said. "The logical response would also be political – something that should not lead to military escalation in a vital strategic area," the official said. Chas Freeman, a China expert and former assistant secretary of defense, said he was inclined to view such installations as serving a military purpose - bolstering China's claims against those of other nations - rather than a political signal to the United States. "There is a tendency here in Washington to imagine that it's all about us, but we are not a claimant in the South China Sea," Freeman said. "We are not going to challenge China's possession of any of these land features in my judgment. If that's going to happen, it's going to be done by the Vietnamese, or . . . the Filipinos . . . or the Malaysians, who are the three counter-claimants of note." He said it was an "unfortunate, but not (an) unpredictable development." Tillerson told the Senate Foreign Relations Committee last month that China's building of islands and putting military assets on them was "akin to Russia's taking Crimea" from Ukraine. In his written responses to follow-up questions, he softened his language, saying that in the event of an unspecified "contingency," the United States and its allies "must be capable of limiting China's access to and use of" those islands to pose a threat.
#South China Sea #Donald Trump #Xi Jinping #US-China relations #Missiles house
You May Also like: