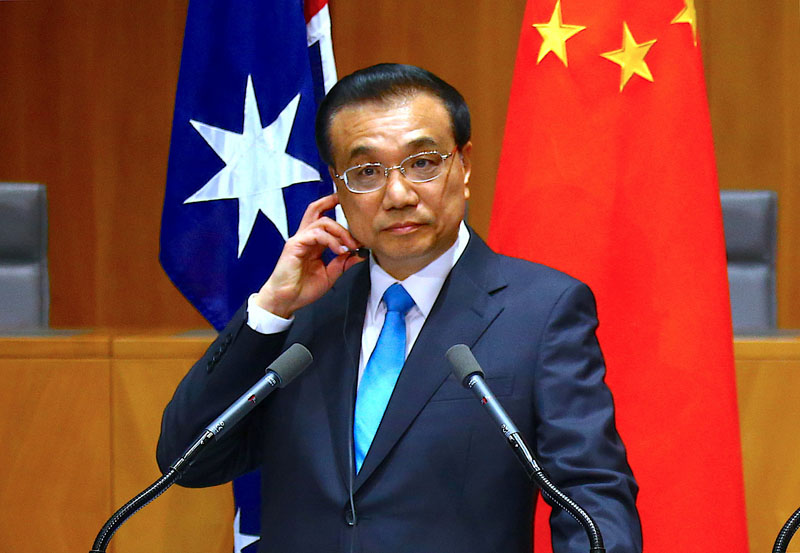 Chinese Premier Li Keqiang reacts during a media conference at Parliament House in Canberra, Australia, on March 24, 2017. Photo: Reuters
SYDNEY:  China is not militarising the South China Sea, Premier Li Keqiang said on Friday, although he acknowledged that defence equipment on islands in the disputed waterway had been placed there to maintain "freedom of navigation".
China has drawn international criticism for large-scale building in the South China Sea, although Li told reporters in Australia the development was for civilian purposes only. "China's facilities, Chinese islands and reefs, are primarily for civilian purposes and, even if there is a certain amount of defence equipment or facilities, it is for maintaining the freedom of navigation," Li said. China claims most of the resource-rich South China Sea, through which about $5 trillion in ship-borne trade passes every year. Neighbours Brunei, Malaysia, the Philippines, Taiwan and Vietnam also have claims on the strategic waterway. The United States estimates Beijing has added more than 3,200 acres (1,300 hectares) of land on seven features in the South China Sea over the past three years, building runways, ports, aircraft hangars and communications equipment. The United States has conducted a series of freedom-of-navigation operations in the South China Sea, raising tensions between Washington and Beijing.
#China #South China Sea #Li Keqiang #Militarizing South China Sea
You May Also like: