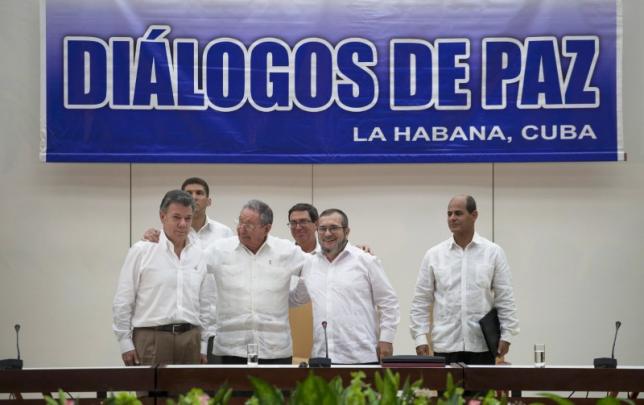 Cuba's President Raul Castro (3rd L) hugs Colombia's President Juan Manuel Santos (L) and FARC rebel leader Rodrigo Londono, better known by the nom de guerre Timochenko, in Havana, September 23, 2015. REUTERS
BOGOTA/HAVANA: A breakthrough in talks between Colombia's government and Marxist guerrillas has raised hopes for a peace deal within six months and it may mean rebel leaders will avoid being extradited to face drug trafficking charges in the United States. President Juan Manuel Santos and the Revolutionary Armed Forces of Colombia (FARC) rebel group agreed on Wednesday to create special courts to try former combatants including guerrillas and also vowed to sign a peace deal by March to end five decades of war. The thorny issue of extradition has not been resolved, however. Sergio Jaramillo, the government's peace commissioner, said the conditions under which rebels could be extradited will not be defined until the final peace deal is reached and he suggested the FARC would not agree to it. "No one participates in a peace process and supports an agreement only to end up extradited, that's obvious," Jaramillo told a news conference in the Cuban capital Havana, where the sides have been negotiating. "But it's also obvious that they have to complete the conditions, some rules of the game, and that is what the final accord will contain." The US government backed the agreement reached this week, with Secretary of State John Kerry calling it "historic progress." Washington has spent billions of dollars on its anti-drugs efforts in Colombia, which is by some measures the world's top cocaine producer. Its military aid helped weaken the FARC, pushing it to the negotiating table. Rebels, drug traffickers and right-wing paramilitaries have all opposed extradition, which typically means long sentences far from their families and fewer opportunities to bribe officials for perks. One of the US targets is FARC leader Rodrigo Londono, better known as "Timochenko", who shared a historic handshake with Santos at the talks in Havana on Wednesday. The State Department alleges Londono was involved in the manufacture and smuggling of hundreds of tons of cocaine and is offering $5 million for information leading to his arrest. Other rebel negotiators at the talks also appear on the US Treasury Department's Kingpin List of major drug traffickers and many face charges in Colombia. Several FARC members are already serving sentences in the United States. The deal on justice agreed on Wednesday would set up special courts to try the worst crimes of the war, from sexual abuse and kidnapping to torture and executions, but it also includes sharply reduced sentences for those who admit guilt. Any peace deal must be approved in a referendum. While most Colombians are anxious for an end to a war that has killed some 220,000 people and forced millions from their homes, many fear former FARC rebels will join organised crime gangs. 'SURRENDER' Right-wing opponents of the centre-right Santos accuse him of being soft on the FARC and giving up too much in the negotiations. "They surrendered to the FARC," pensioner Alfonso Llana lamented as he strolled through a Bogota park with his wife. Beginning in 1964 as a Marxist peasant rights movement, the FARC lost popular support in the decades that followed, especially as it turned to drug-trafficking and kidnapping. The government says a deal may boost economic growth by up to 2 percentage points. Interior Minister Juan Fernando Cristo said he hopes the deal with the FARC will lead Colombia's smaller rebel group, the National Liberation Army, or ELN, to seek peace as well. "Hopefully the ELN will understand this is an opportunity to lay down arms, to stop causing so much violence in Colombia and to join this collective effort of peace," he told Reuters. The ELN began holding closed-door meetings with the government nearly two years ago as a precursor to formal talks. Believed to have around 2,000 active members, compared to the FARC's 8,000, the ELN has continued attacking army troops and infrastructure despite those preliminary negotiations.
#peace deal #Colombia #extradition #Colombian rebels
You May Also like: