Trump after Berlin, Turkey attacks: 'I've been proven to be right' 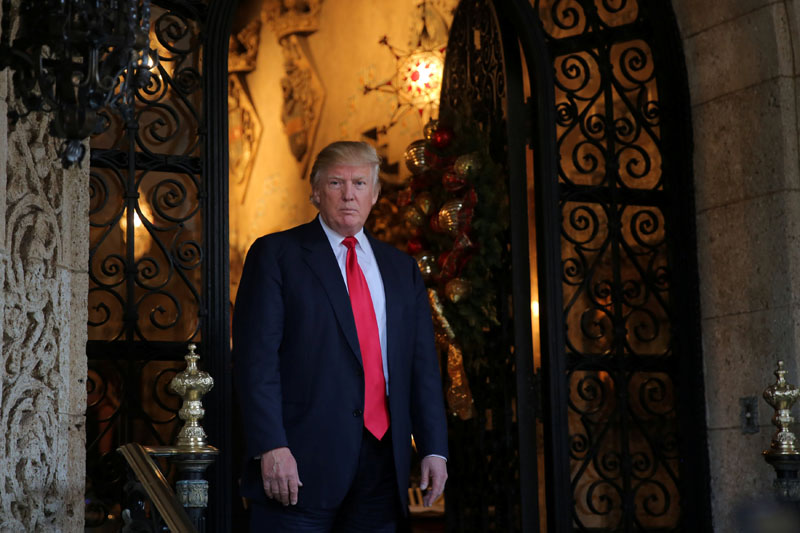 US President-elect Donald Trump pauses as he talks to members of the media after a meeting with Pentagon officials at Mar-a-Lago estate in Palm Beach, Florida, US, on December 21, 2016. Photo: Reuters
PALM BEACH: US President-elect Donald Trump said on Wednesday that attacks this week in Berlin and Ankara proved he was correct to propose curbing Muslim immigration to the United States. "What’s going on is terrible, terrible," Trump told reporters, when asked about the truck attack that killed 12 people at a Christmas market in Berlin and the killing of Russia's ambassador to Turkey. Islamic State claimed responsibility for the Berlin killings though US officials say they had seen no evidence that the militant group had directed the attack. The assassin in Turkey shouted about the war in Syria as he shot dead the envoy from Moscow, which aids Syrian President Bashar al-Assad against rebels in that country's civil war. Trump was asked by reporters outside his Mar-a-Lago resort in Palm Beach, Florida, if Monday's violence would affect his consideration of a ban on Muslims entering the United States or of a registry for immigrants from Muslim countries. "You know my plans. All along, I’ve been proven to be right. 100 percent correct. What’s happening is disgraceful," Trump said. At one point in his election campaign, Trump called for a temporary ban on Muslims entering the country as a means of fighting terrorism, drawing widespread criticism at home and abroad. He later rephrased this to propose temporarily suspending immigration from regions deemed as exporting terrorism and where safe vetting cannot be ensured. However US-born citizens, rather than immigrants, were involved in some of the main attacks in the United States in recent years, including the mass shooting at an Orlando gay nightclub in June. On Monday, Trump issued a statement about the Berlin attack in which he said that Islamic State and other Islamist militants "continually slaughter Christians in their communities and places of worship as part of their global jihad." But when asked about his reference to Christians, the president-elect on Wednesday appeared to soften his response: "It's an attack on humanity, and it's gotta be stopped." Current and former US officials had reacted with dismay to Trump's original language, saying it could inflame anti-Western sentiment among Muslims and erode cooperation from Muslim communities that they view as central to quashing such attacks. Trump has been critical of Obama, and of his Democratic rival in the November presidential election, former Secretary of State Hillary Clinton, for what he says is a reluctance to clearly name Islamist militancy as a threat.
#Ankara #Donald Trump #Berlin #Muslim immigration #Russia ambassador #Mar-a-Lago resort
You May Also like: