Trump gains on Clinton despite furor over women, election comments 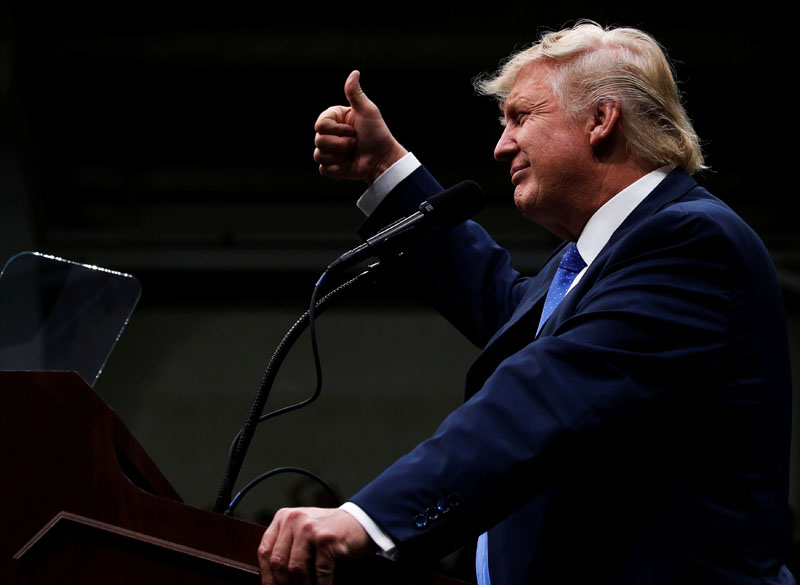 NEW YORK: Donald Trump gained on Hillary Clinton among American voters this week, cutting her lead nearly in half despite a string of women accusing him of unwanted sexual advances and the furor over his disputed claims that the election process is rigged, according to a Reuters/Ipsos poll released on Friday.

The survey also showed that 63 percent of Americans, including a third of Republicans, believe the New York real estate mogul has committed sexual assault in the past, though the Republican presidential candidate has denied the recent accusations.

Clinton, the Democratic former secretary of state, led Trump 44 percent to 40 percent, according to the October 14-20 poll, a 4-point lead, with the November 8 election fast approaching. That compared with 44 percent for Clinton and 37 percent for Trump in the October 7-13 poll released last week.

Support for Clinton had been mostly rising in the seven-day tracking poll since the last week of August, when the candidates were about tied.

The latest reading showed that Trump's deficit narrowed to what it was before a video surfaced on Oct. 7 featuring him bragging about groping and kissing women. Several women have since accused him of making unwanted sexual advances in separate incidents from the early 1980s to 2007.

Trump has denied the allegations, calling them "totally and absolutely false."

The latest poll included a separate series of questions that asked people what they thought of Trump's conduct around women. It found 63 percent of American adults, including 34 percent of likely Republican voters, agreed with the statement "I believe Donald Trump has committed sexual assault in the past."

Reuters contacted a few of the poll respondents who said they felt that Trump had "committed sexual assault" but were still supporting his candidacy. Their answers were generally the same: Whatever Trump did with women in the past is less important to them than what he may do as president.

"I’m embarrassed that our country can’t come up with better candidates, to be honest with you," said Evelyn Brendemuhl, 83, of Hope, North Dakota. But "he’ll appoint more conservative judges, and she’s (Clinton) pro-abortion, and I’m not for that."

Gary Taylor, 59, a Republican from Colorado said his support stemmed mostly from a desire to see "something different than the last eight years" in the White House.

The Reuters/Ipsos poll was conducted online in English in all 50 states. It included 1,640 people who were considered likely voters, given their voting history, registration status and stated intention to vote. It has a credibility interval, a measure of accuracy, of 3 percentage points, meaning results could vary by that much either way.