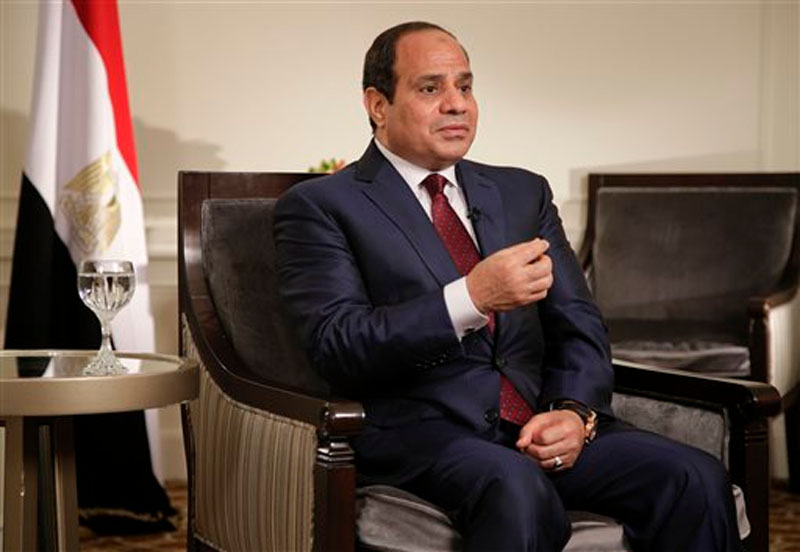 Egyptian President Abdel Fattah el-Sisi answers questions during an interview on Saturday, September 26, 2015, in New York. Sisi discussed various issues including Egypt's role in the Middle East, his country's work on an expansion project to the Suez Canal, and relations with the United States. Photo: AP
UNITED NATIONS: Egypt's President Abdel-Fattah el-Sissi said in an interview that the Mideast region needs to cooperate to defeat a worsening terrorist threat that has led to a "ferocious war" in Egypt and created the danger of some countries "sliding into failure." In a wide-ranging interview with The Associated Press Saturday night, el-Sissi also said that Syria should not be divided after its civil war, that the Egyptian military needs to be "augmented" to defeat terrorists fighting in the Sinai and Western Desert, and that efforts should be renewed to solve the Palestinian issue and expand Egypt's nearly 40-year-peace with Israel to include more Arab countries. Resolving the Palestinian question, he said, could "change the face of the region and ... bring about enormous improvement to the situation. ... I'm optimistic by nature and I say that there is a great opportunity." The 60-year-old former military chief, who ran for president and assumed office in 2014 after the army ousted his predecessor Mohammed Morsi the year before, spoke with AP at a New York hotel on Saturday night after he addressed a UN summit that adopted new development goals for the next 15 years. He will also attend the annual ministerial meeting of the General Assembly at UN headquarters that begins Monday. Speaking just days after pardoning and releasing two jailed Al-Jazeera English journalists in Cairo, el-Sissi said he is open to clemency to other journalists who have been tried and convicted in absentia. But he said he would only act within his powers as president and would also respect the prerogatives of Egypt's judiciary. "Rest assured that we are always keen on sorting out issues and problems, especially those that relate to journalists and to the media personnel," he added. El-Sissi, speaking through a translator, said that regional security is in "its most vulnerable state." "Let it suffice to look at the map and find countries that are suffering from failure. There is an increase in the extremist groups. There is the problem of the refugees that are flowing into Europe. With all that in mind, we can sense how difficult and how complicated" the challenge is, he said. "I don't want to say we are late in doing what we should have done, but (defeating the threat will require) a lot of effort, and not only a lot of effort but as a matter of fact it entails a good amount of understanding and cooperation from every country ... to restore the countries that are now sliding into this vicious cycle of failure." In that vein, the Egyptian leader cited what he called an "improving" relationship with the United States. Ties are "strategic and stable," he said. It has been a tumultuous period in Egypt. Longtime leader Hosni Mubarak was ousted in 2011 in the Arab Spring revolt that eventually led to the installation of the Muslim Brotherhood's Morsi as Egypt's first popularly elected president; he then was tuned out by the military amid another popular uprising. "The last two years were a real test of the endurance and strength" of the ties with the US, el-Sissi said. Since then, Egypt has been fighting an insurgency by militants based in the Sinai who have pledged allegiance to the Islamic State group, and militants have carried out bombings and shootings against policemen and troops in Cairo and other cities. Security forces have cracked down hard on Egypt's Muslim Brotherhood and other Islamists. Hundreds of Islamists have been killed and thousands arrested, and Morsi and other Brotherhood leaders have had death sentences issued against them in multiple trials. The trials and the crackdown have brought heavy criticism from human rights groups. El-Sissi's government contends the Brotherhood is complicit in violence, a claim the group denies, saying authorities want to crush them as a political opposition. Asserted el-Sissi: "The problem with the Muslim Brotherhood is not a problem between the government of Egypt and these people. The real problem is between the Egyptian people and the Muslim Brotherhood." He said the Brotherhood has given "a very bad impression" and Egyptians "are not able to forgive and forget." The Egyptian military, he said, "has always been a factor for stability" and should be strengthened because it faces "a ferocious war against terrorism and extremism ... Increasing the military capability of the Egyptian military means that it can strike a strategic balance" for the region. Referring to the civil war that has shattered Syria, the president said "we are very keen that Syria remains as a nation and as a state and does not divide into smaller states." He warned that the collapse of Syria would mean that all its weapons and equipment would fall into the hands "of the terrorists." If that happens, he said, the danger will not only hurt Syria but spill over to its neighbors and "will pose a serious threat to the rest of the region, and this is what we fear." Asked how extremists could be neutralized, he offered no immediate solution: "This is exactly the dilemma we are talking about."
#Syria #Egypt’s president #islamist #ferocious war #strategic and stable #terrorism and extremism #Abdel-Fattah el-Sissi
You May Also like: